I'm Cheap, But My Kid Is Smart.

So this is how the poor folks do Disney:

We packed in a bunch of snacks and water bottles (Disney is ok with this, which is really nice considering they want $2.79 for a stinkin' bottle of water!) Then we ate one meal in the park each day.

The first night we ate at place at the fake wharf at California Adventures where we got sourdough bread bowls filled with delicious soups. Yep, definitely a hearty meal/bargain at $8.99 each.

Thursday night I splurged and bought everyone the picnic meals which also got us entrance to the preferred seating, (well really standing), area for the World of Color show. These came with a dessert, drinks and fancy World of Color reusable bags so at $15 each it wasn't too bad a deal. 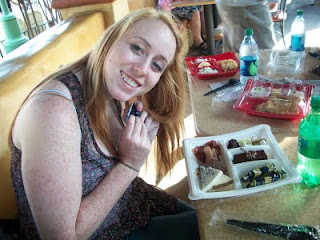 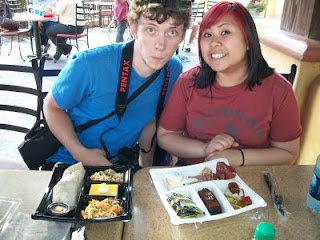 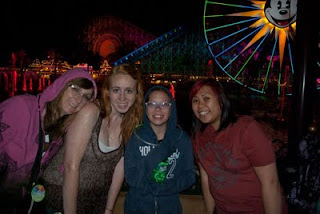 We watched World of Color from front row center. It was AMAZING! Definitely a highlight. We were in the splash zone, so we ended up a bit "moist", but it was worth it!

For the girls, I gave them each $25 spending money before our trip. I also extended an opportunity to earn more money with the deal that I would give the $1 for every stuffed animal they were willing to get rid of.

Both of their rooms look like some sort of plushie zoo gone wild, so I figured this would be an incentive to "thin the herd".

Well, Miss Moo completely dismisses my offer. She's not gonna part with even one crittter. Nat however, decides that she'll see what she can come up with. I have to promise that when they are donated some other child will love and appreciate her animals. And I tell her I'm pretty sure they will all go to good homes.

A little while later Nat shows up with a box full of animals. A flippin' box! THEN she goes down to the basement and goes through another box that has been down there since we moved 2 years ago (and you think they forget about that stuff!)

She proudly counts the animals and declares that I owe her 34 dollars!Dang! Now why didn't I offer 25 cents per animal? Holy cats! (and cows, and bunnies, and birds...)

To say the least Nat ended up bringing home a few more souvenirs than her sister! (She even treated herself to cotton candy which I was too cheap to buy for her.)

Both the girls got a set of ears. They went to a shop where you can build your own ear hat. Each girls' hat definitely reflects their personality! 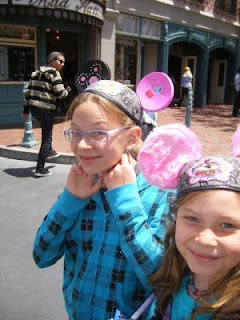 Miss Moo's are funky and sassy just like her, and Nat's are cuddly and sweet. (Shhhh....don't tell Nat, but I'm pretty sure those fuzzy ears are made from discarded stuffed animal hides.)

But the real deal at Disneyland is the build your own Mr Potato Head. You get to fill a box full of parts for $20. These aren't any old parts, they're exclusive Disney parts. Filling up the back of the potato body is ok, and then the rest is like a twisted game of Tetris. The only rule is you have to be able to shut the lid of the box. 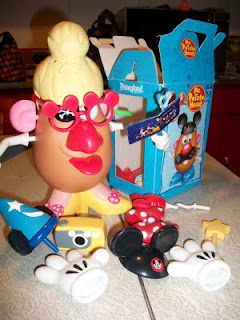 Here is Nat's potato. There are still parts in the box too! I don't think there's any way we could get it all to fit in the box again! (I wanted her to get the pirate hat, but the Cinderella hair took up too much room, so she let me stuff in the pirate eyes as a consolation.)

So be frugal when you go to Disneyland, but don't be stupid. Especially when it comes to kids and money!
Posted by Lesley at 9:12 PM

I love all your ideas for keeping it cheap. And you're not the only one who does. :) My dad worked for Disney so we went all the time and always took a picnic and almost never bought any snacks or souvenirs.

looks like so much fun. I want to go to CA so badly this summer, but it prolly won't happen with the upcoming move, the new grandson and different folks coming to visit us this summer.
Maybe in the Fall?
Love D-land! And thanks for sharing your tips too. I'll have to remember them!