Life is too short to put off camping. Every summer I tell myself I'd LIKE to take the kids camping, but I never do, due to work schedules, or lack of money, etc. This year I'm determined though, and with my tax refund I splurged on a few essential camp items. Walmart had a tent and two queen air mattress bundle online for Memorial Day, so I snapped one up along with a camp stove.

Now the tent I bought is not just an ordinary tent, it is a 60 second tent. Yes, according to the video, that's how long it takes to set up. According to me, it takes about 3 times that long. Seriously, it's pretty cool. The poles are already in it, one just basically pops it up. The 60 seconds does not include unfolding it or staking it down, this is going from unfolded to popped up, the rest of the set-up takes some time, but I'm very pleased with it so far.

Of course getting it back in the bag it came in? Not really happening. Who packs these things? I swear it's like trying to put toothpaste back in a tube! I think I've settled on rolling it up and bungee cording it, and using the bag for all the accoutrements.

Our maiden voyage for the tent took place at Lake Alpine. Natalie was the only one of my children willing and/or able to go (remember, I have a teenager!) We went from 100 degree heat to stepping out of the car and immediately looking for our sweaters! 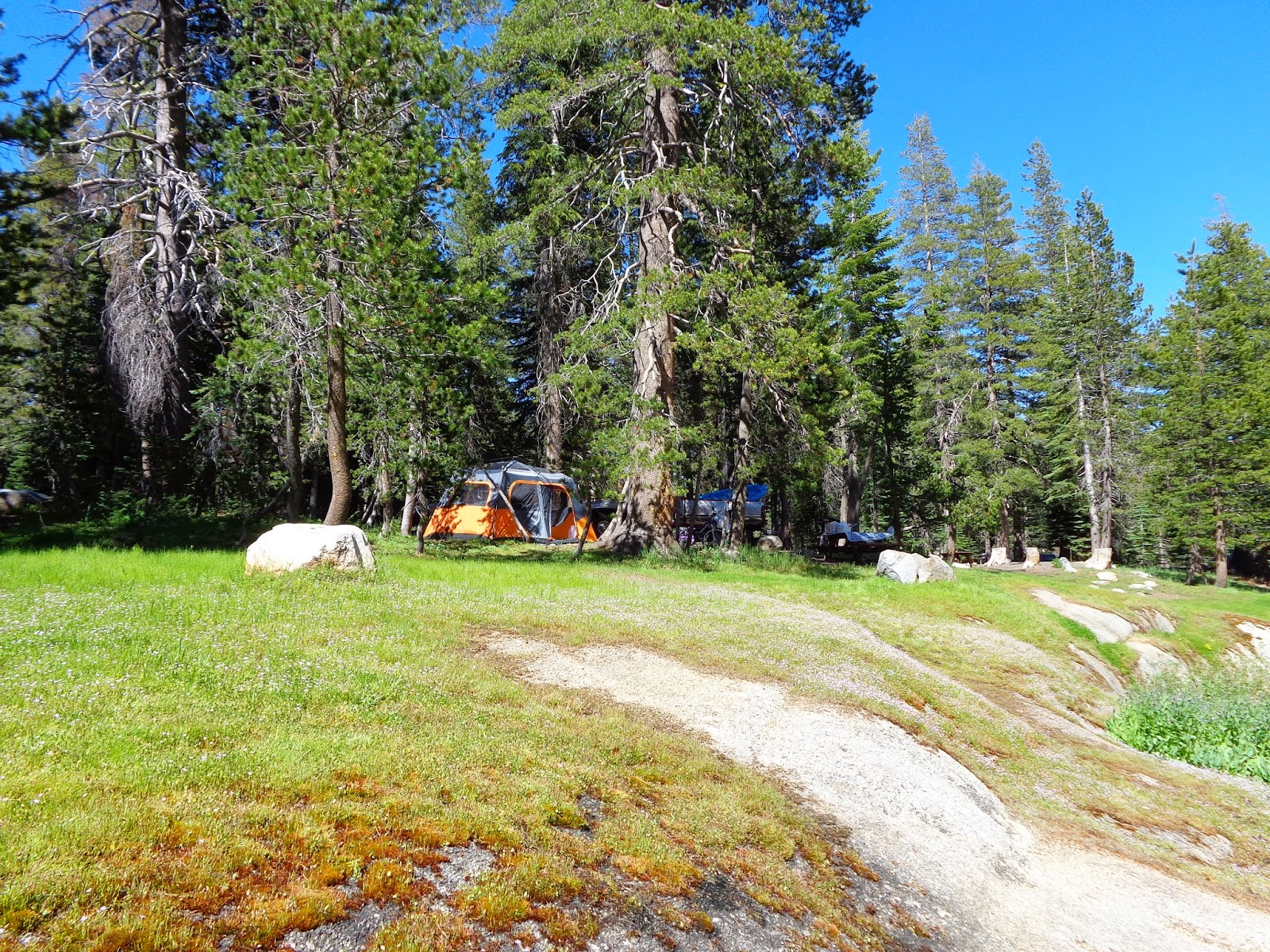 Also the wind was trying to blow the hair off our heads! We had the kayaks, but one look at the white caps on the lake made us decide that bike riding and bug hunting looked much more appealing!

Our campsite was so beautiful. There was a carpet of these tiny purple flowers: 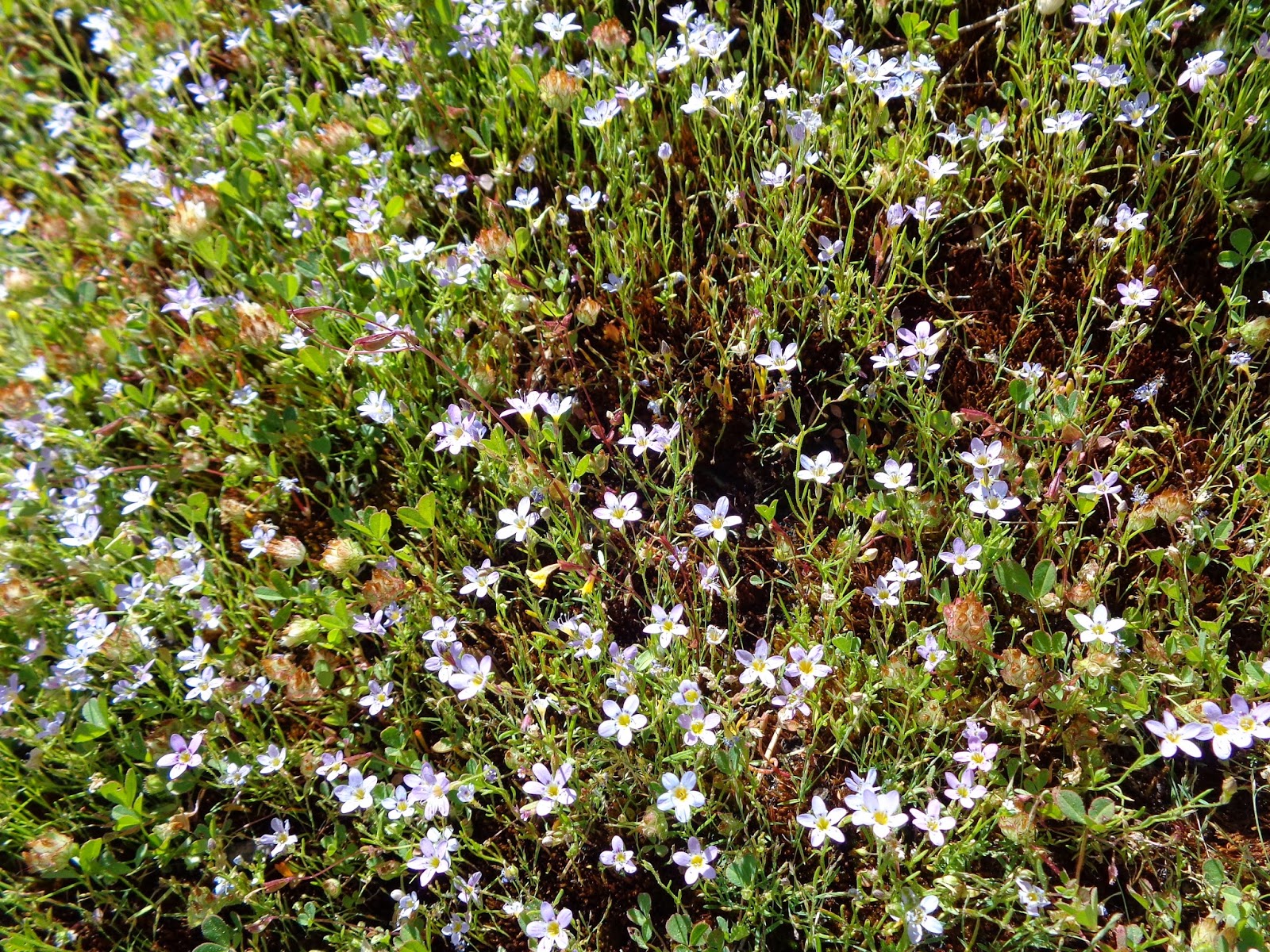 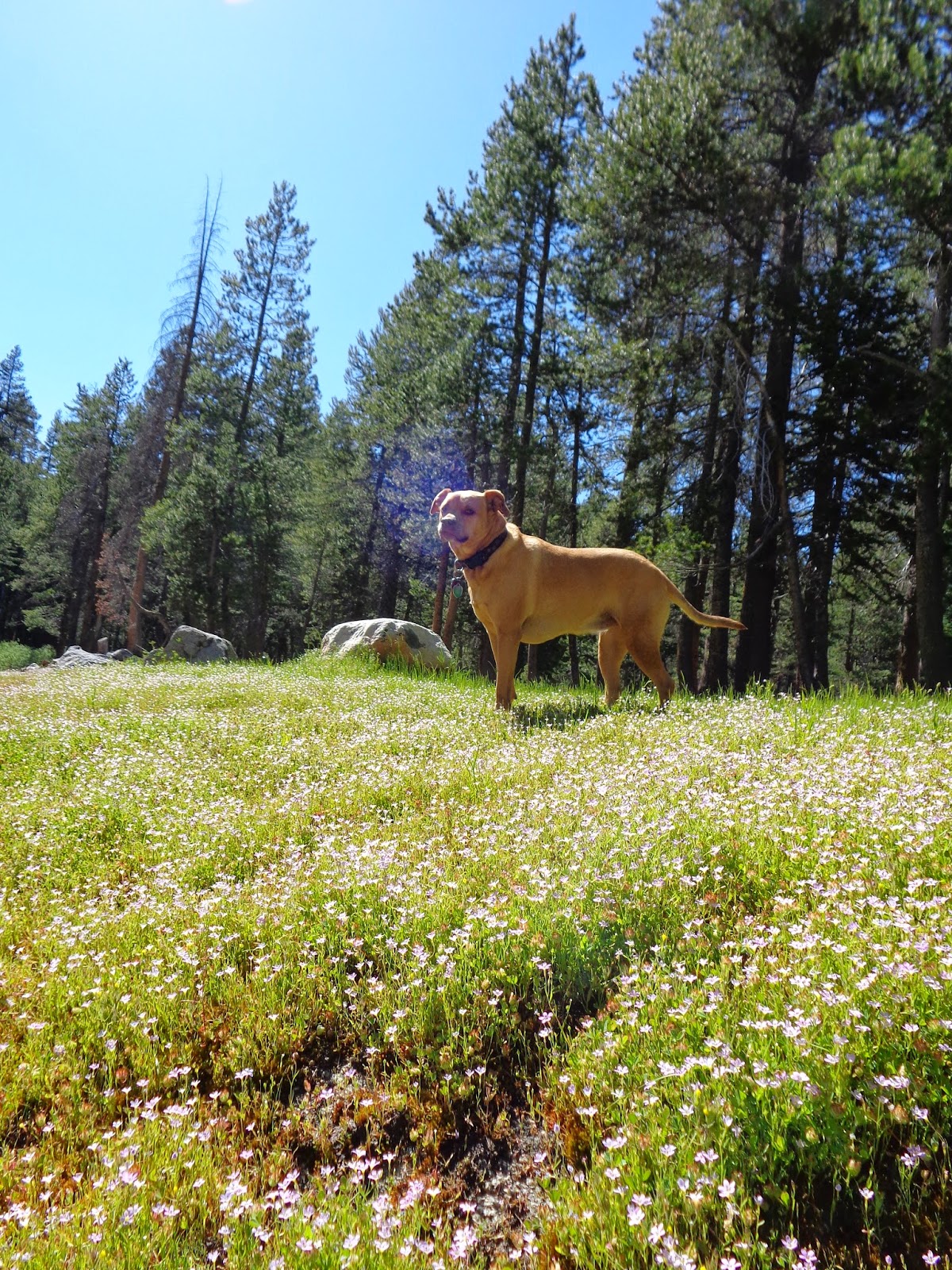 Natalie got out her dollar store bug house and got busy catching small butterflies and hellgrammites from the creek right next to our camp: 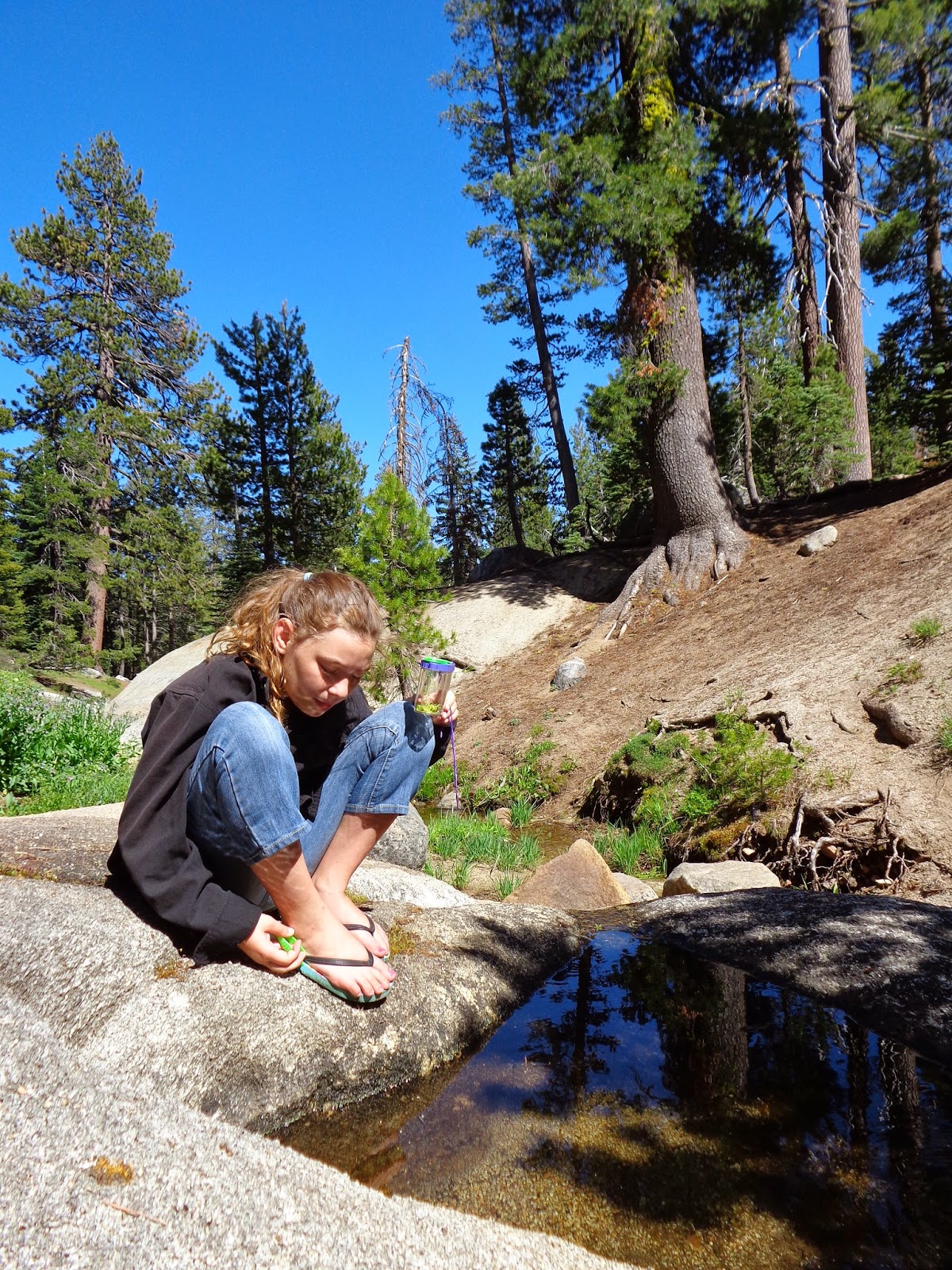 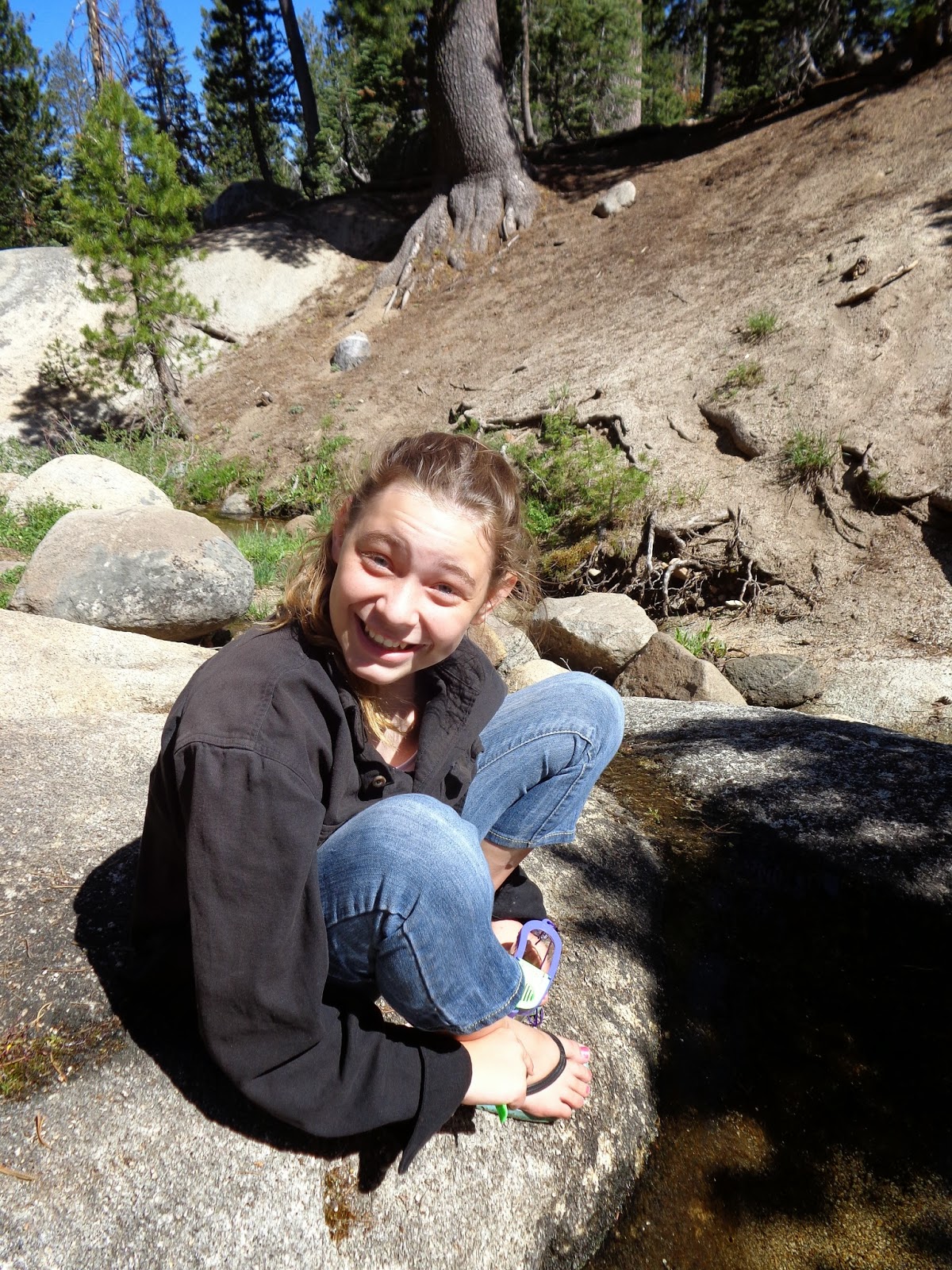 Next we went for a bike ride since Lake Alpine has a really nice bike trail. Boy, am I out of bike riding shape! I had to walk a couple hills, but it was fun, and Natalie found the last of the snow: 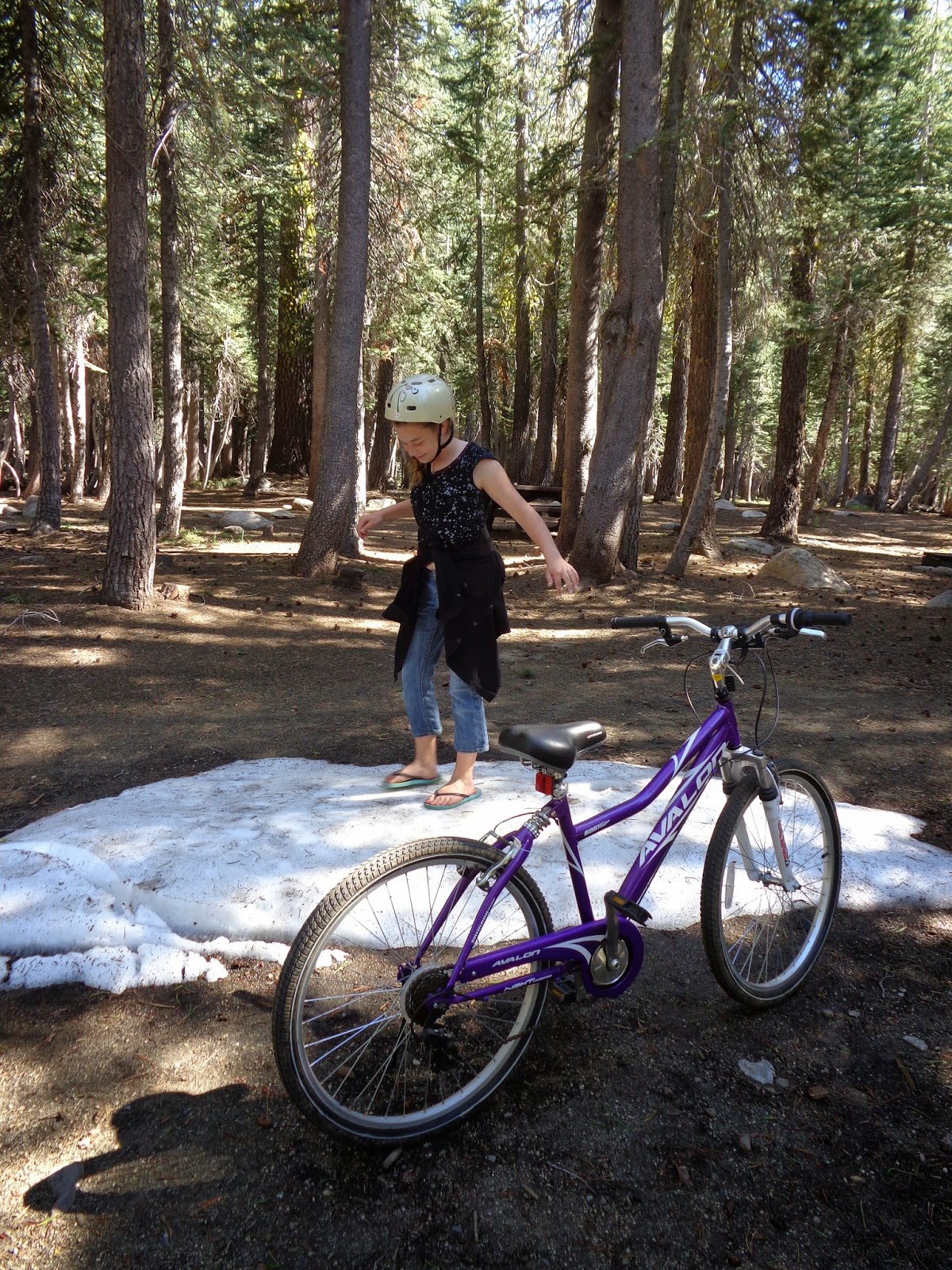 Straight across from our camp was this huge boot print from Paul Bunyan: 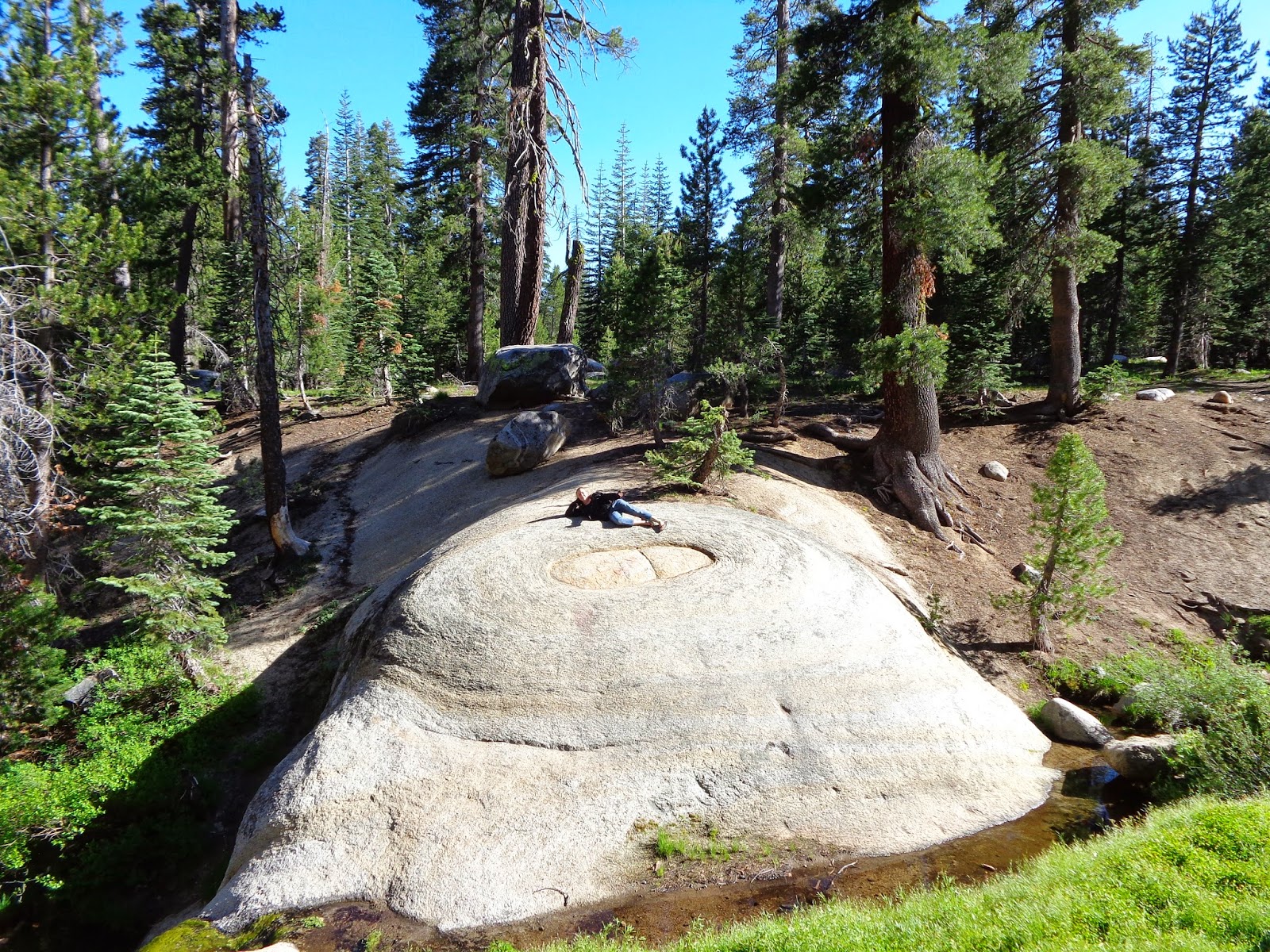 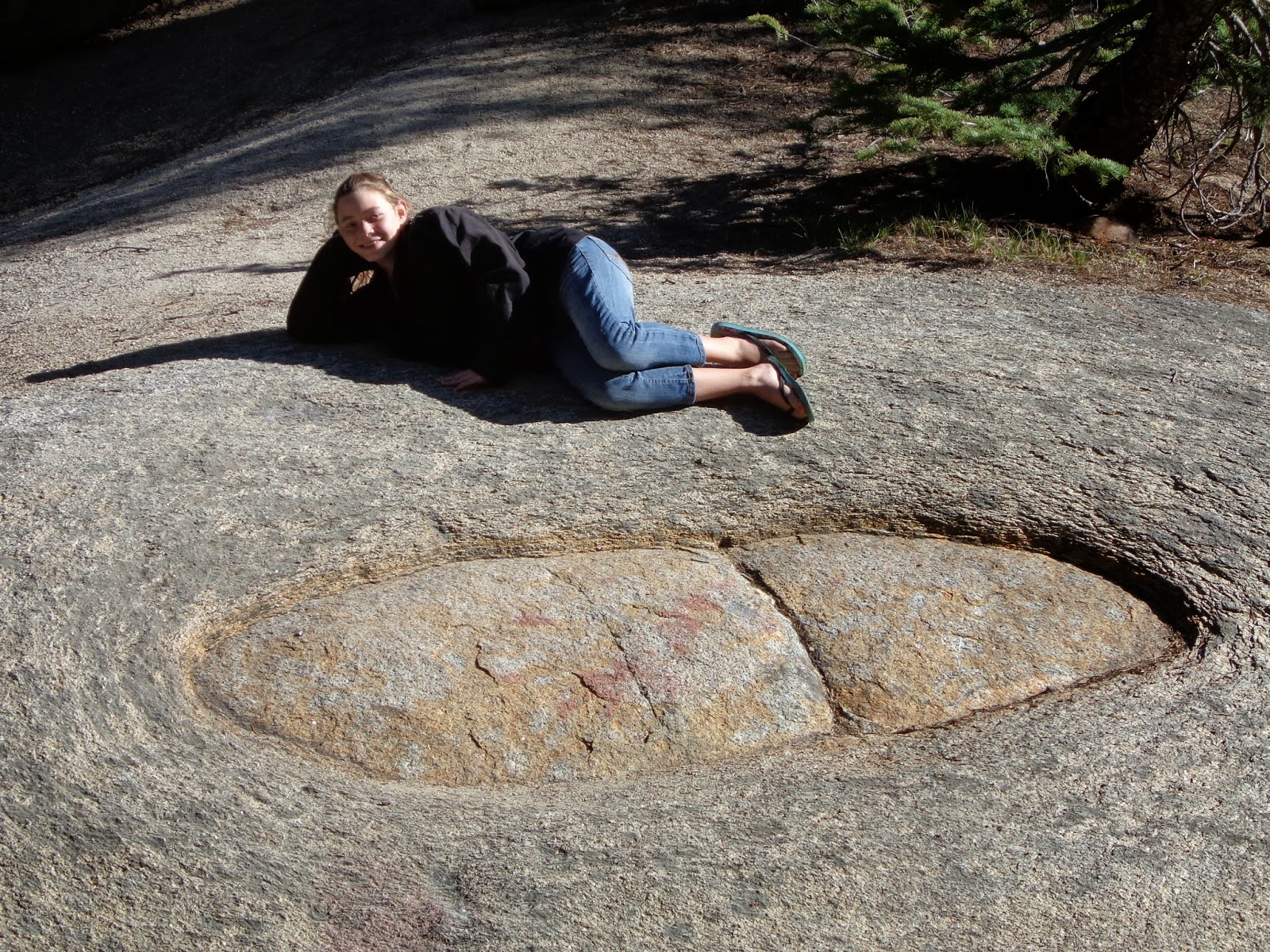 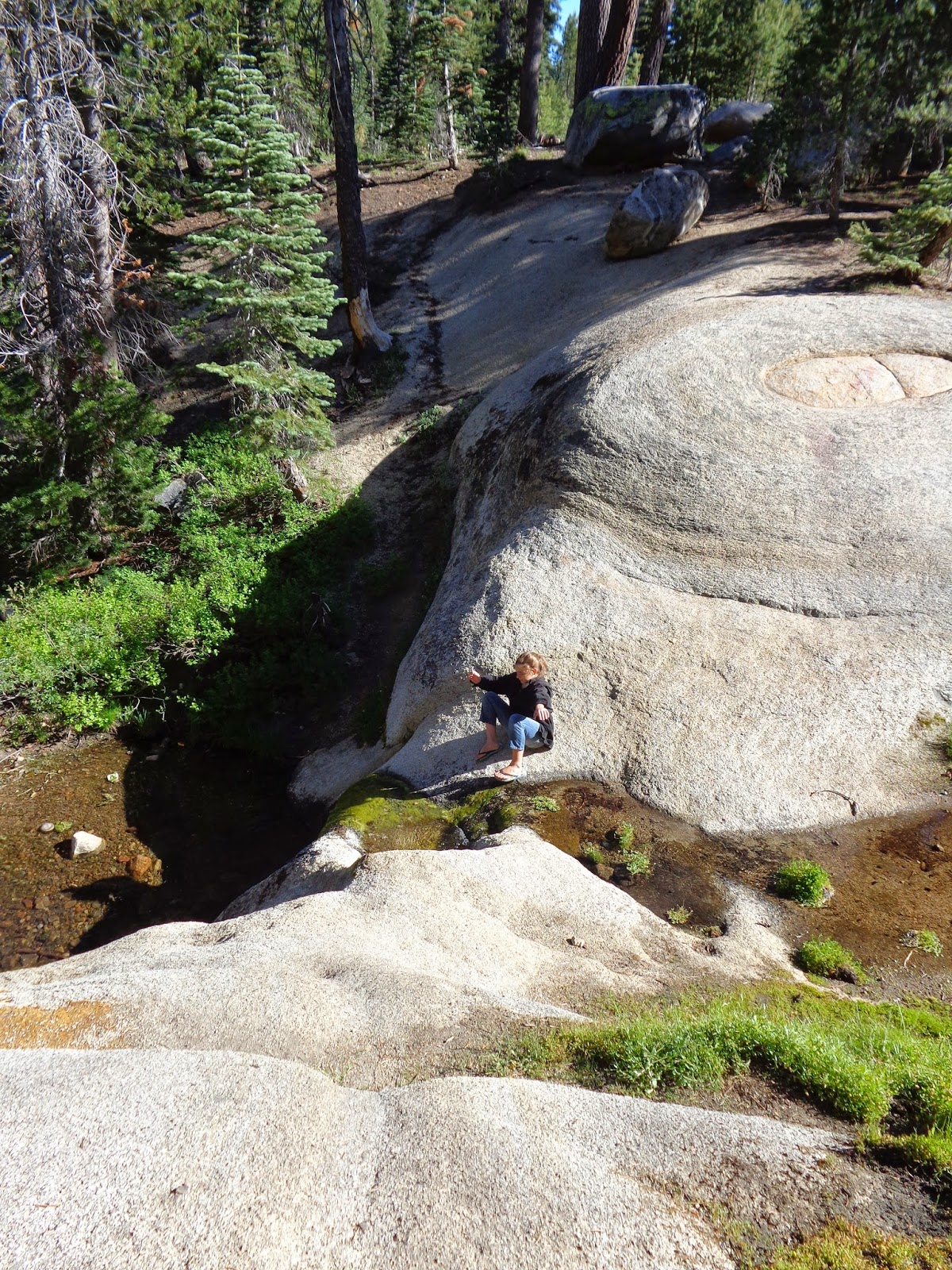 Is there anything more fascinating than watching a camp fire? ( well, probably, but when you have no electronics, this is pretty cool): 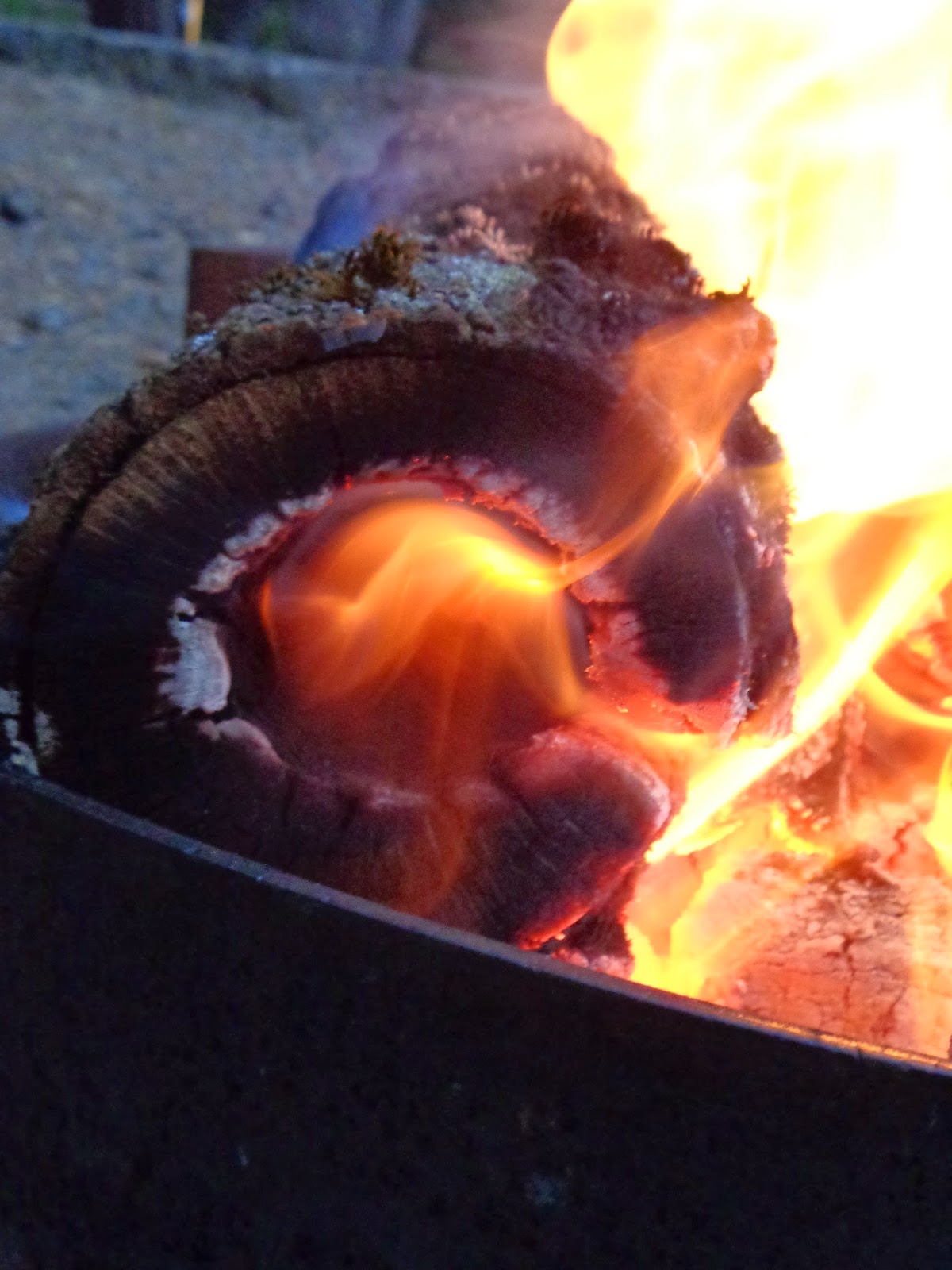 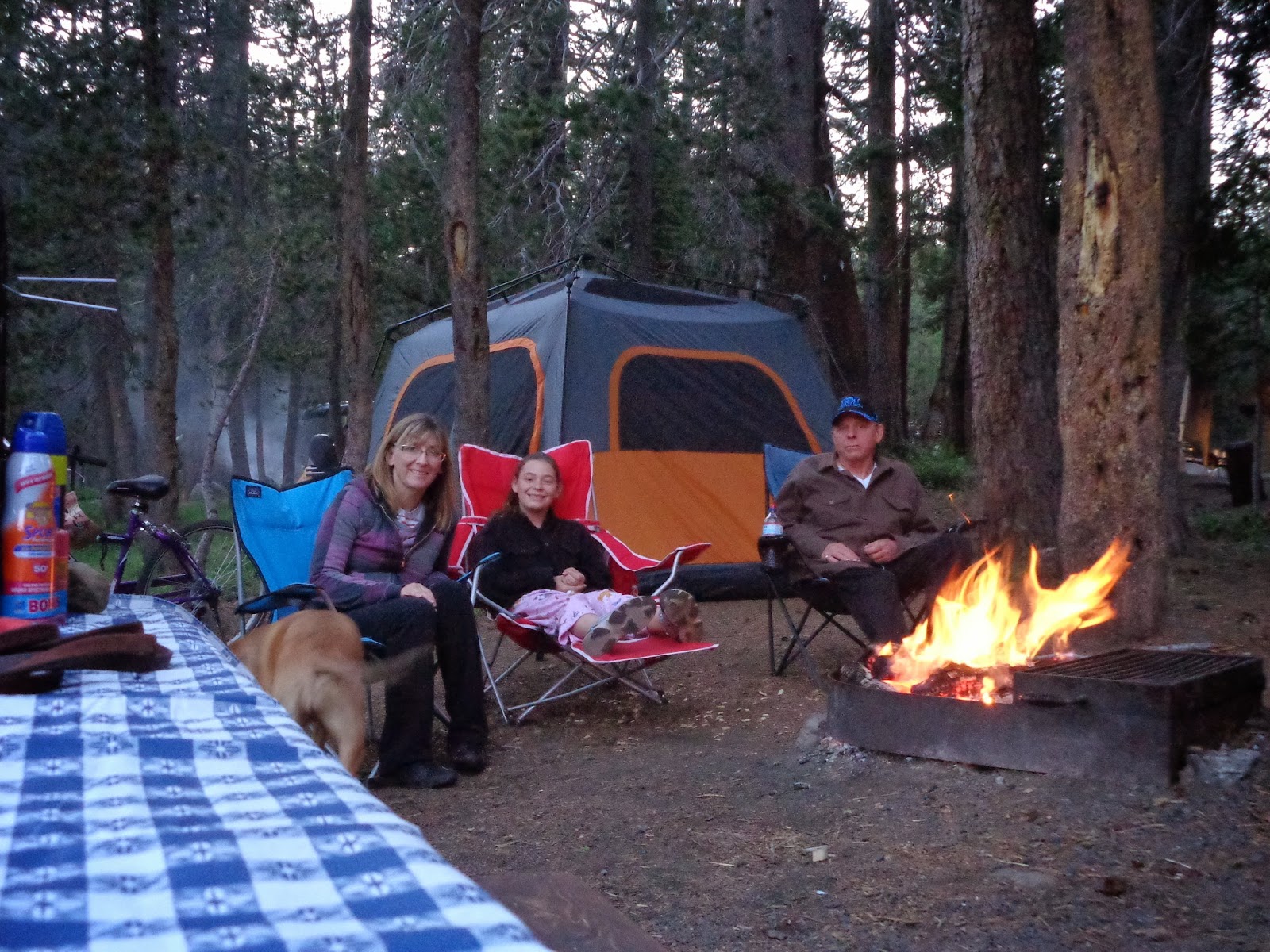 I was really excited to be camping when it was a full moon, and especially the prospect of kayaking with the full moon which was on Friday the 13th (dun-dun-dunnn). On the 12th, at 8:30pm this is what we saw: 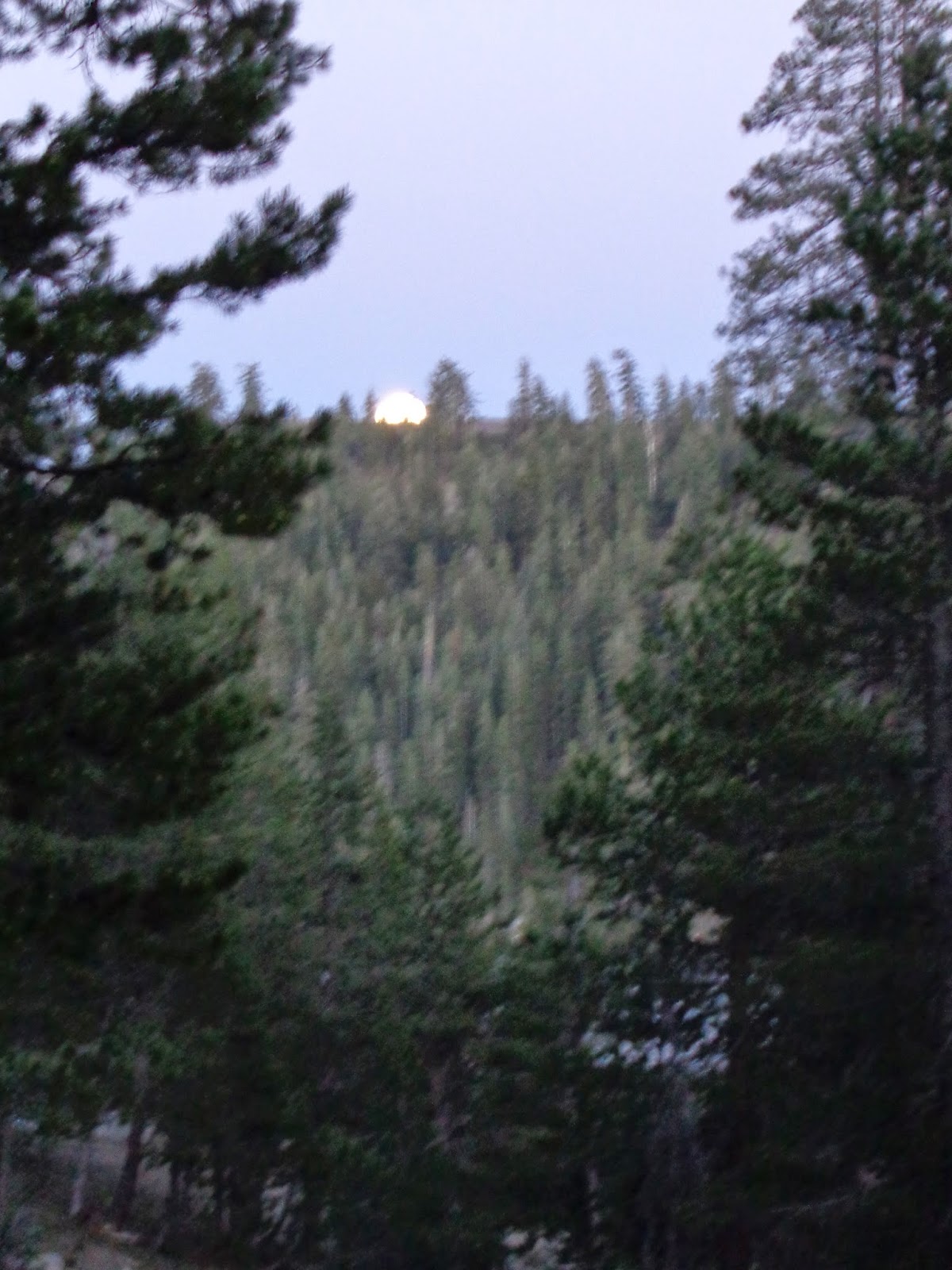 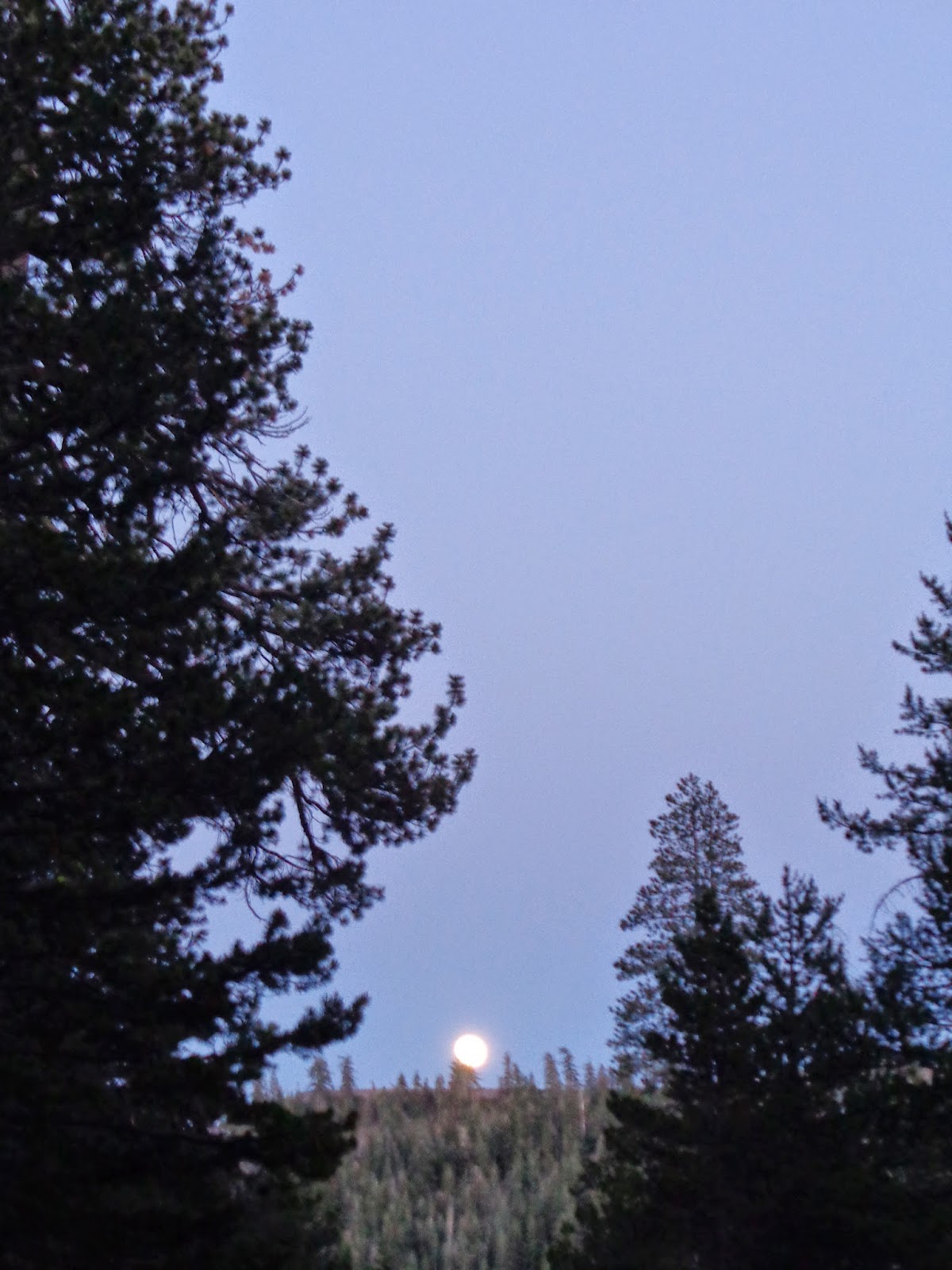 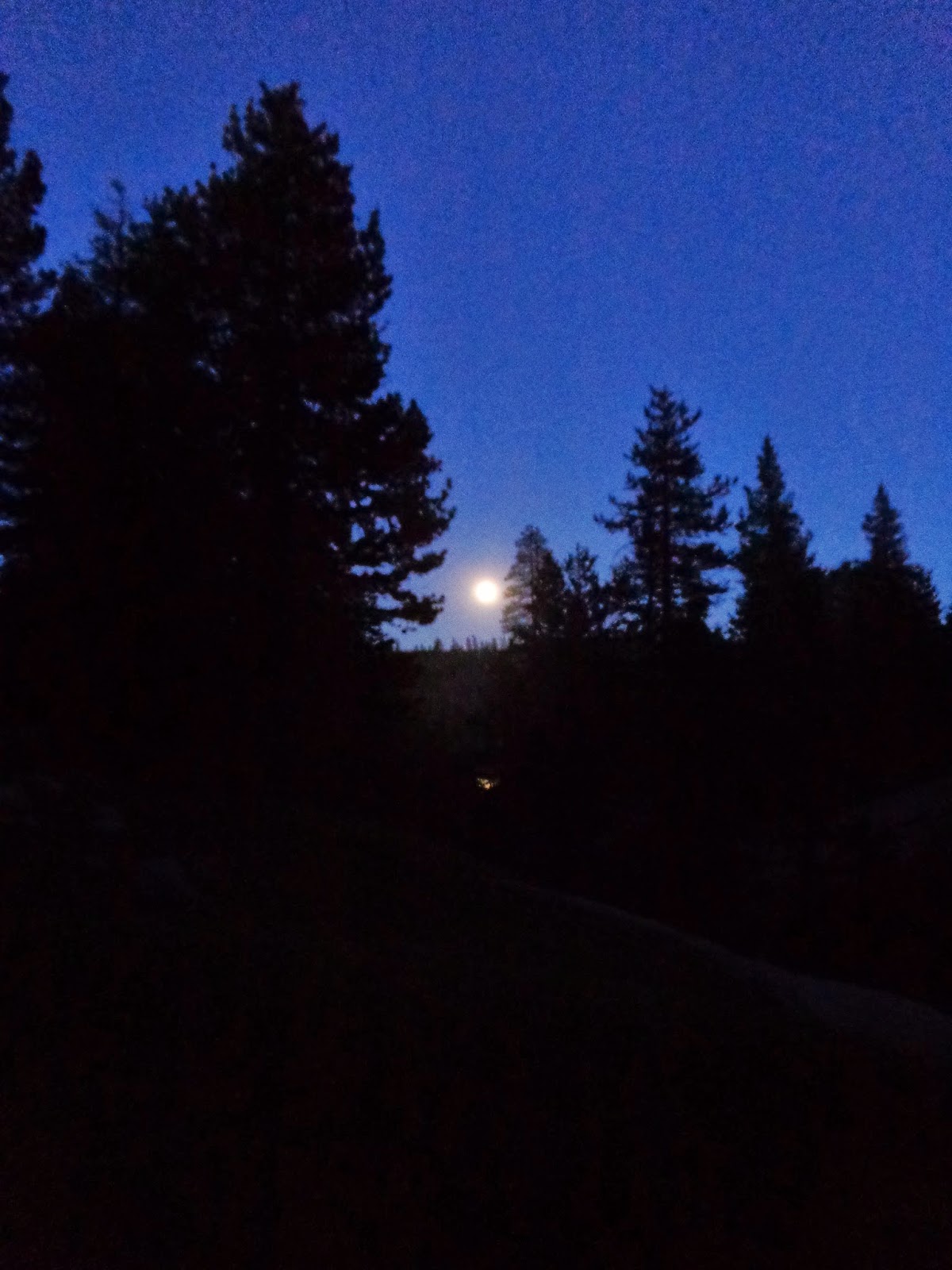 So we figured that the following night would be perfect for our full moon paddle. In the mean time, after Natalie read aloud to us from the Spiderwick Chronicles, we spent a chilly night in our sleeping bags. Brrrrr.....
The next morning we had little boxes of cereal for breakfast. This is one of my camping splurges. I love to eat out of the cereal box when I camp, and eat sugary cereal I usually wouldn't buy or eat. 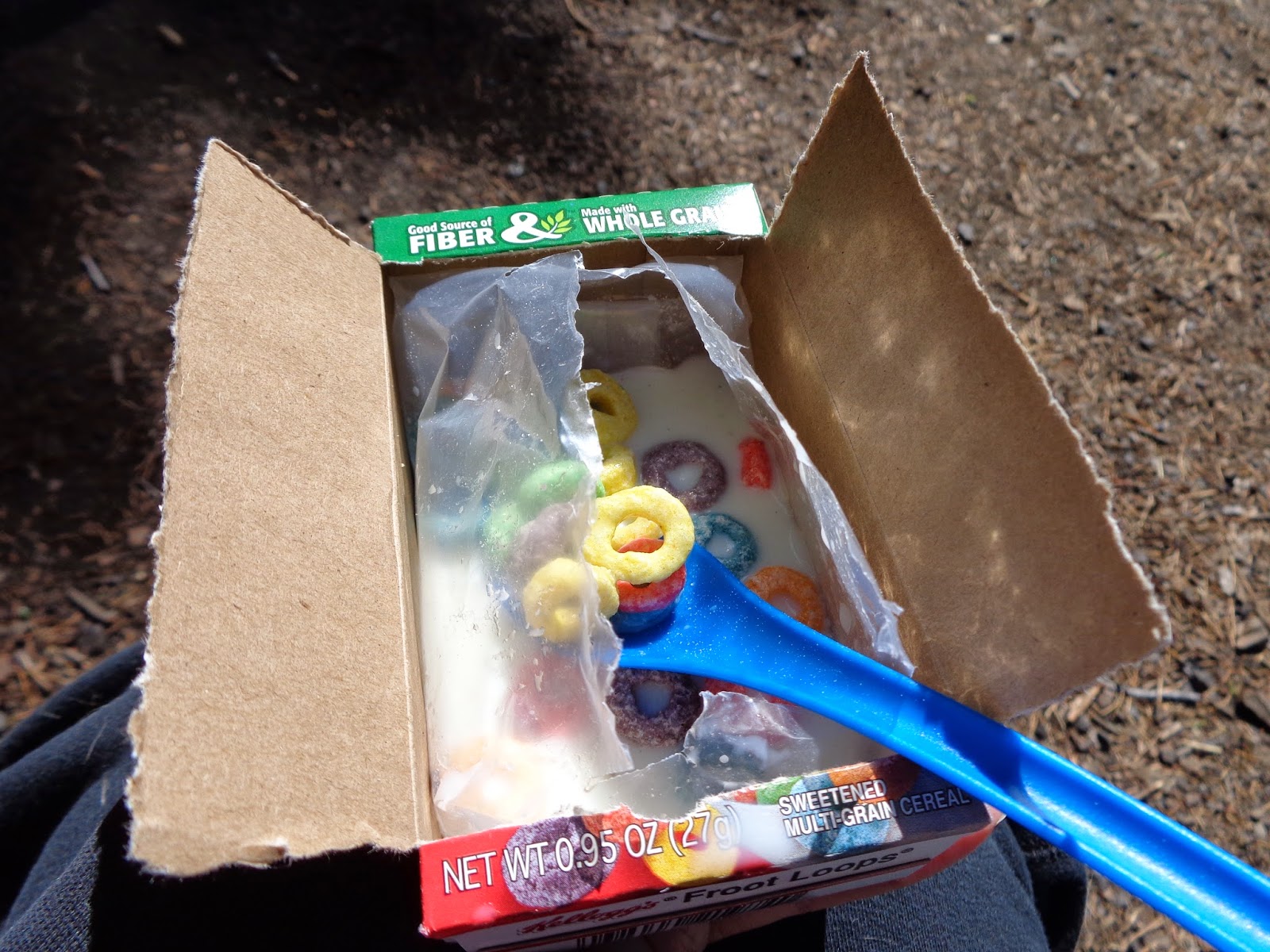 Again, the day was windy, but maybe a bit less, so we put off kayaking until evening when the wind died down.
In the mean time we saw this conglomeration of cones making a star: 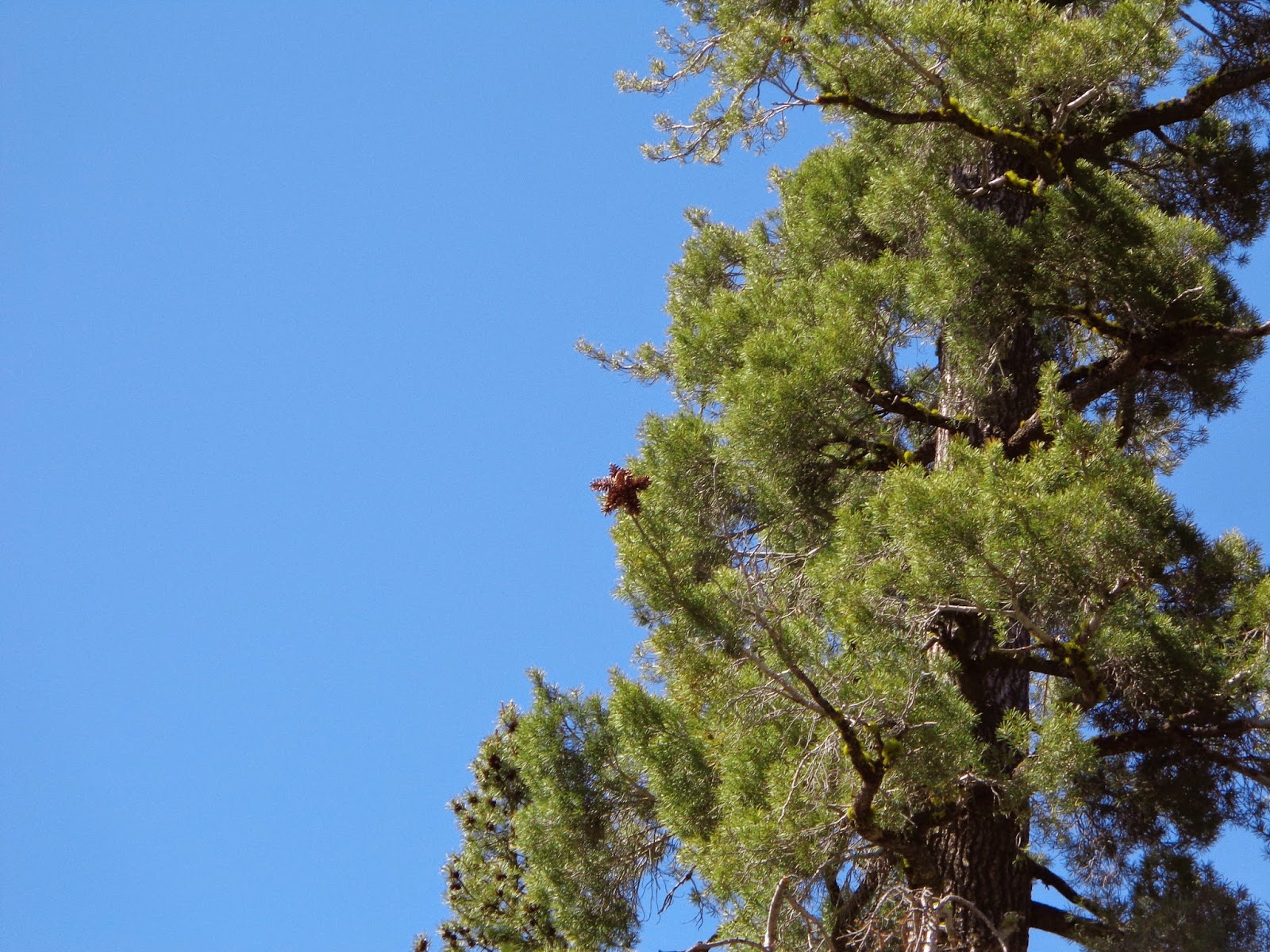 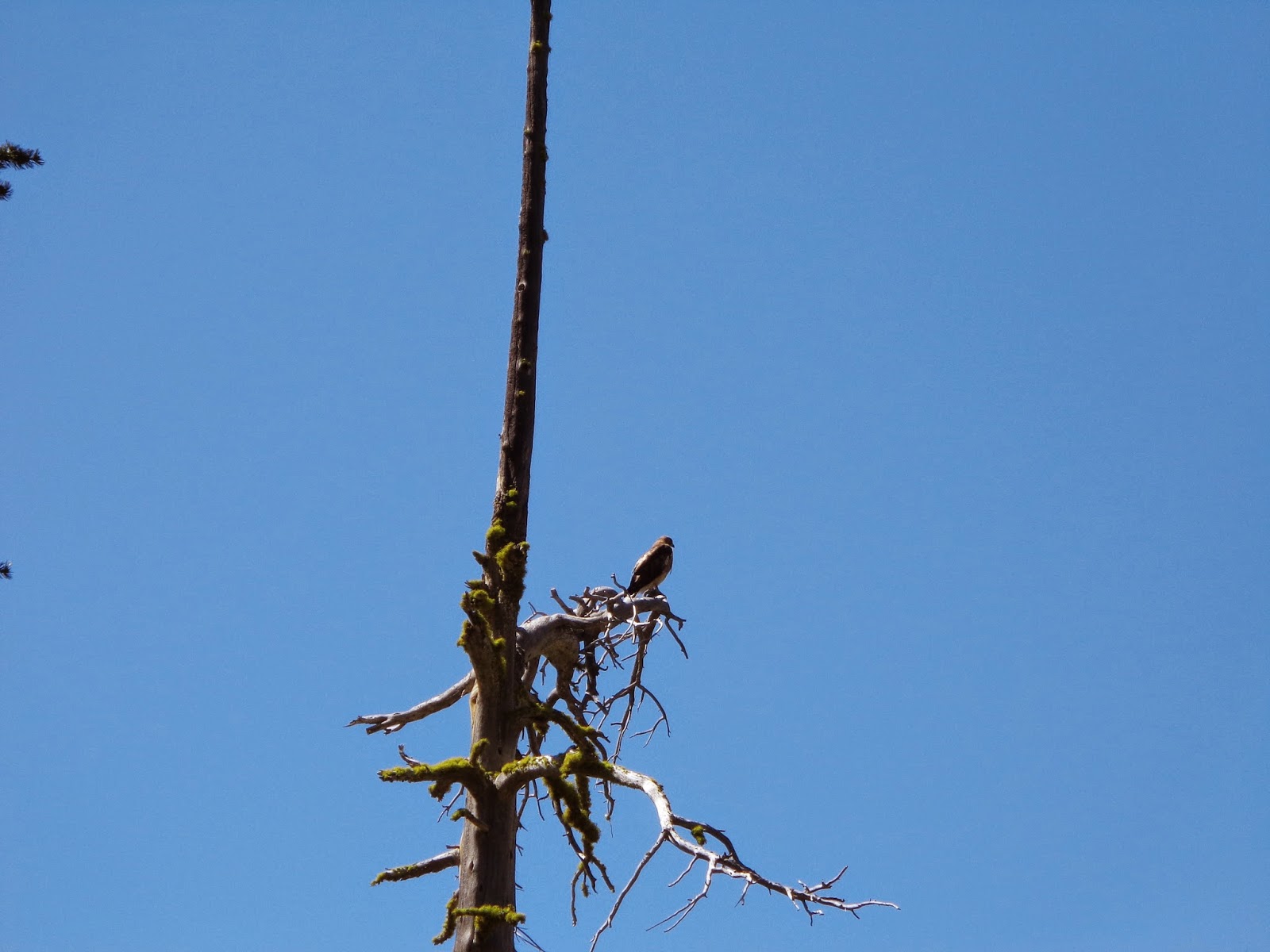 also, I was kind of proud of my Pinterest inspired paper towel holder/kitchen crate. I put one of our hot dog sticks through the paper towels and holes in the crate--it was very handy, and my dish towel hung in the handle opening. Then I packed everything up in the crate when it was ready to go. Not exactly awe-inspiring, but super handy and something I wouldn't have thought of on my own. 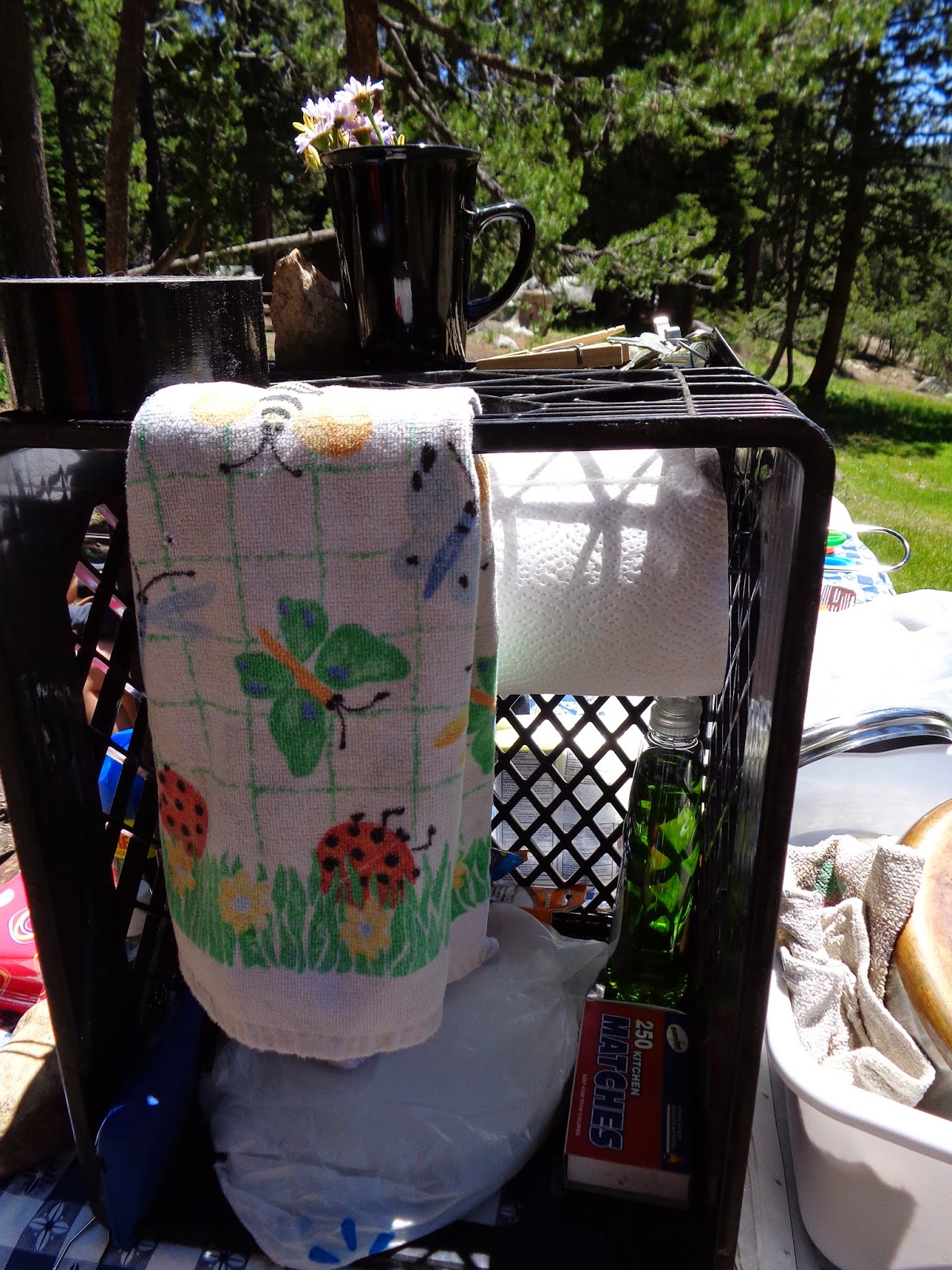 Natalie had neglected to pack a decent sweater, so we ran into "town" and found this cute sweatshirt that she LOVES: 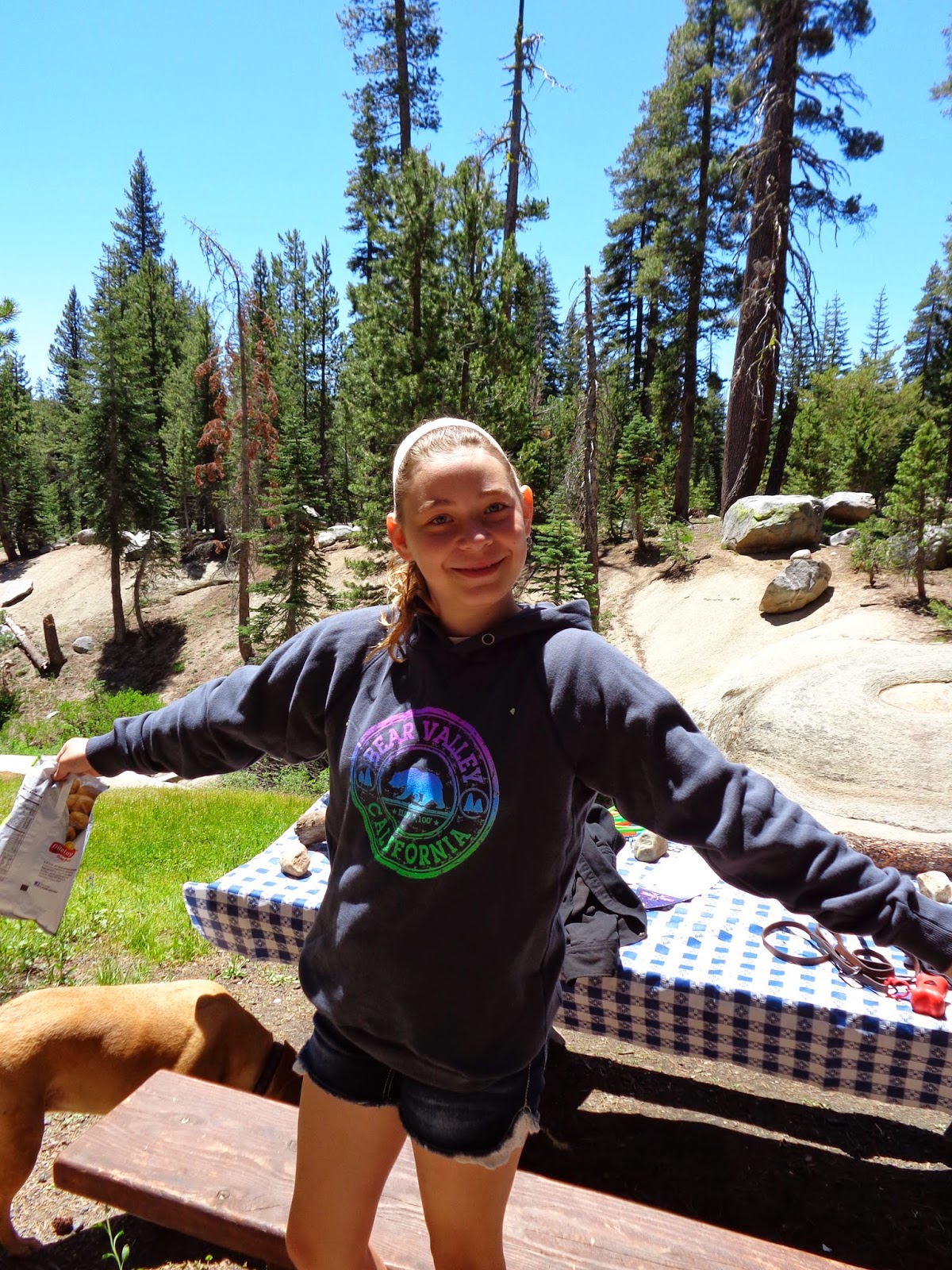 After PBandJ's for lunch, it was off on another bike adventure where we found this nice granite "beach": 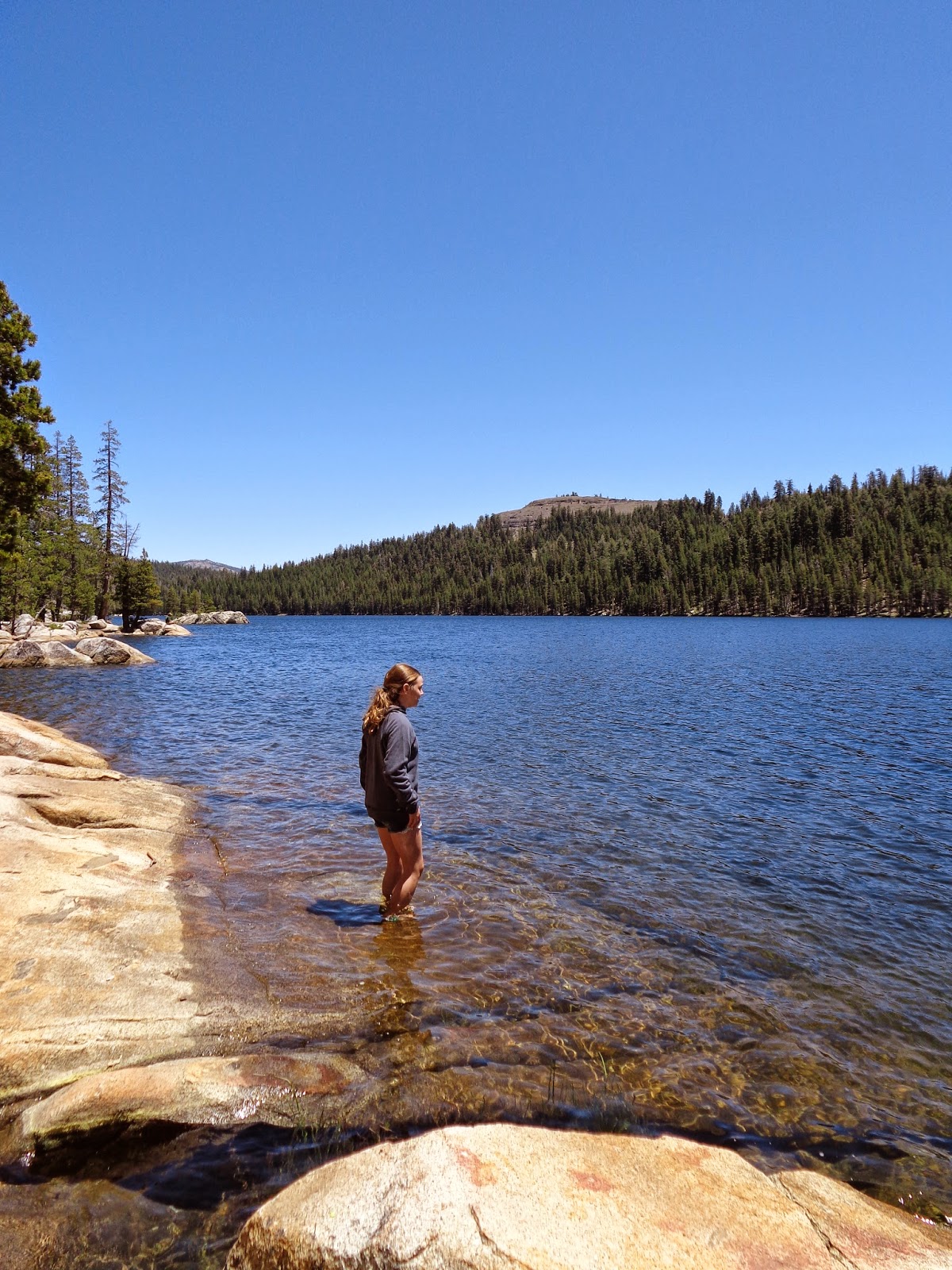 and my favorite wildflowers, Pussy Paws--they feel like the bottom of a kitty's foot: 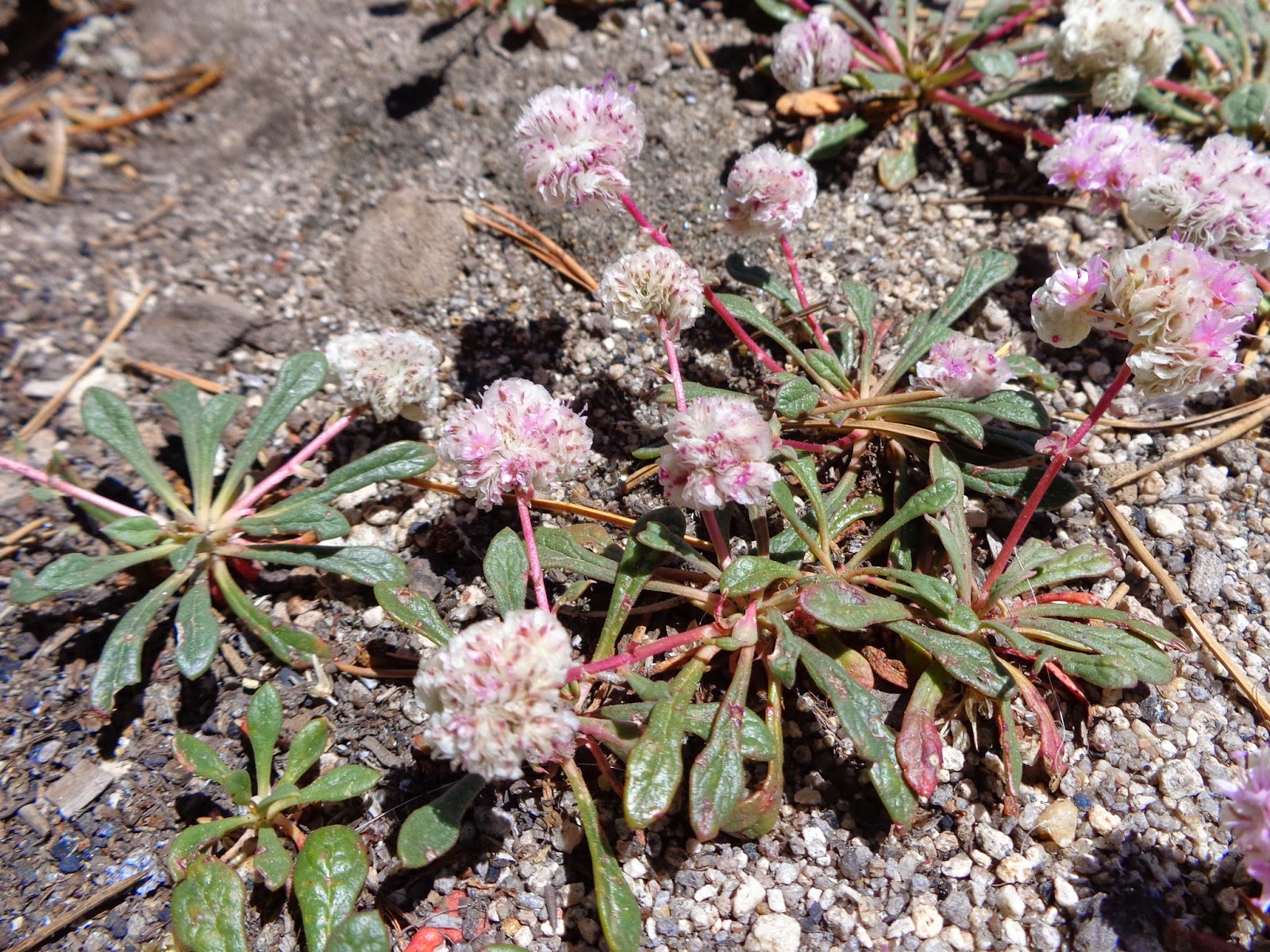 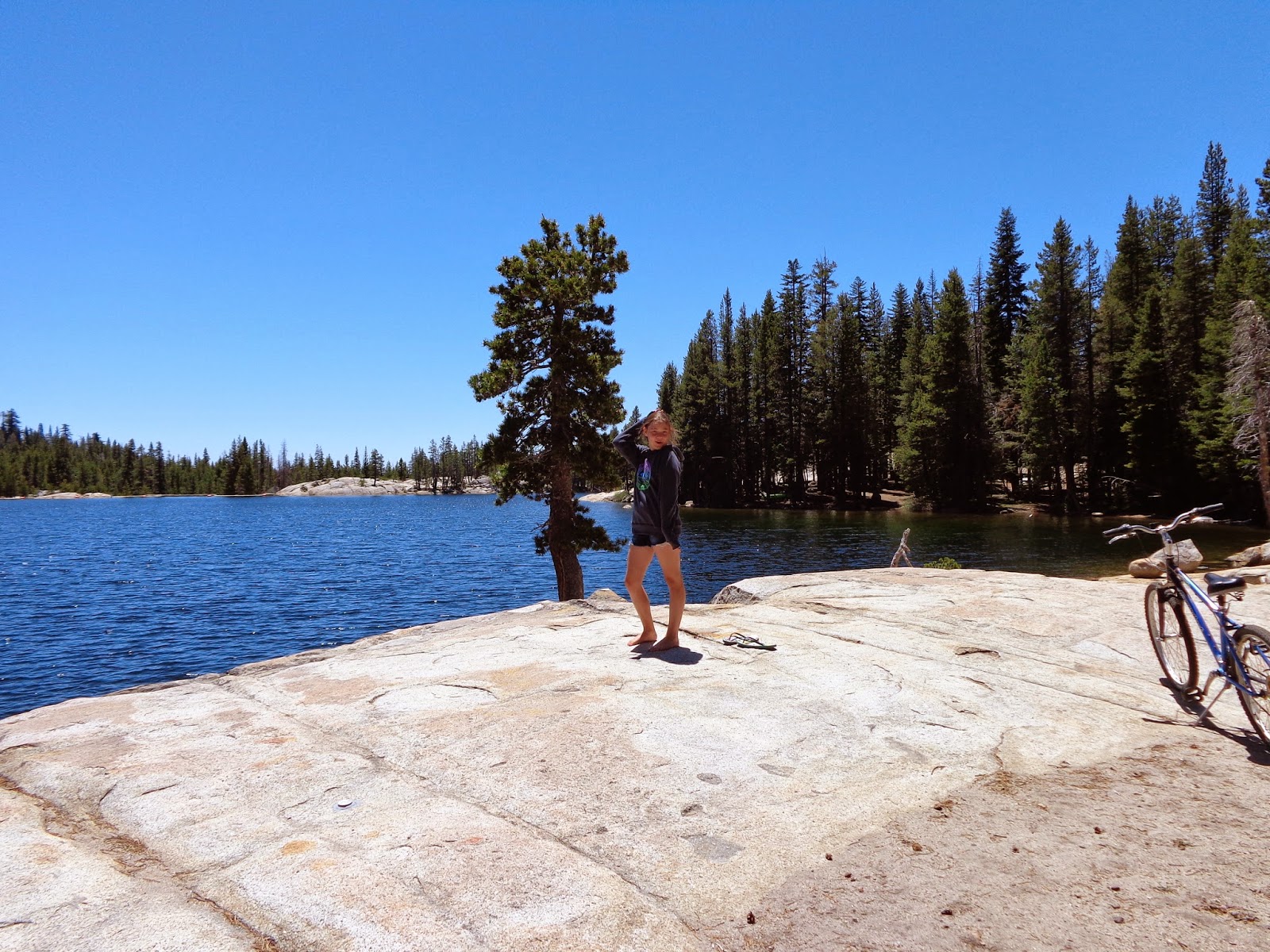 After biking it was off to the showers (this is from inside the tent as we gather our stuff to go): 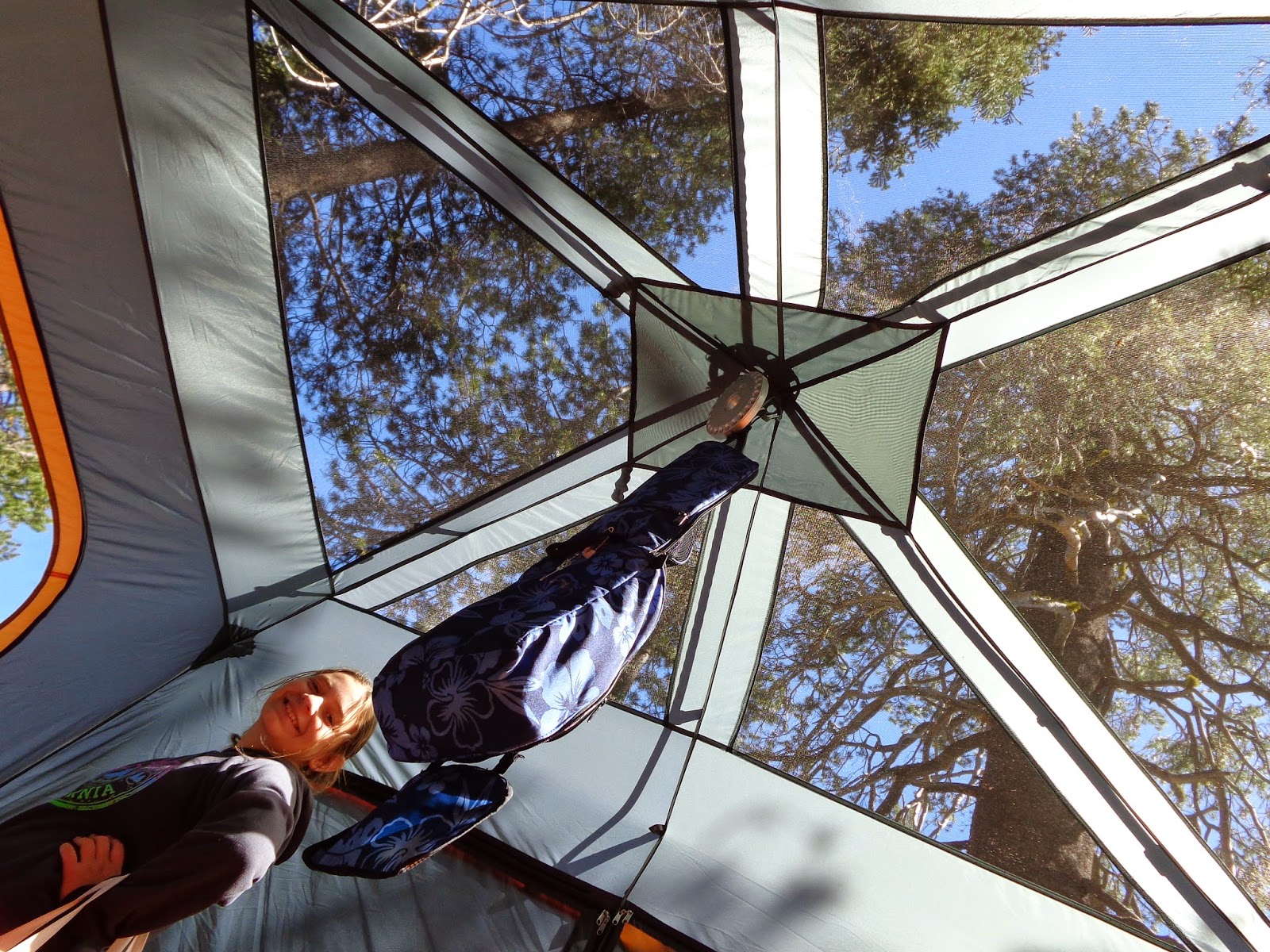 $2 of quarters and lots of banging on the machine, buys you 5 minutes of shower time. No more, no less, and if you spend a minute and a half trying to adjust the water to somewhere in between SCALD and SUB ZERO, well that's your tough luck! But if felt pretty good nonetheless.

Later that evening this was the scene: 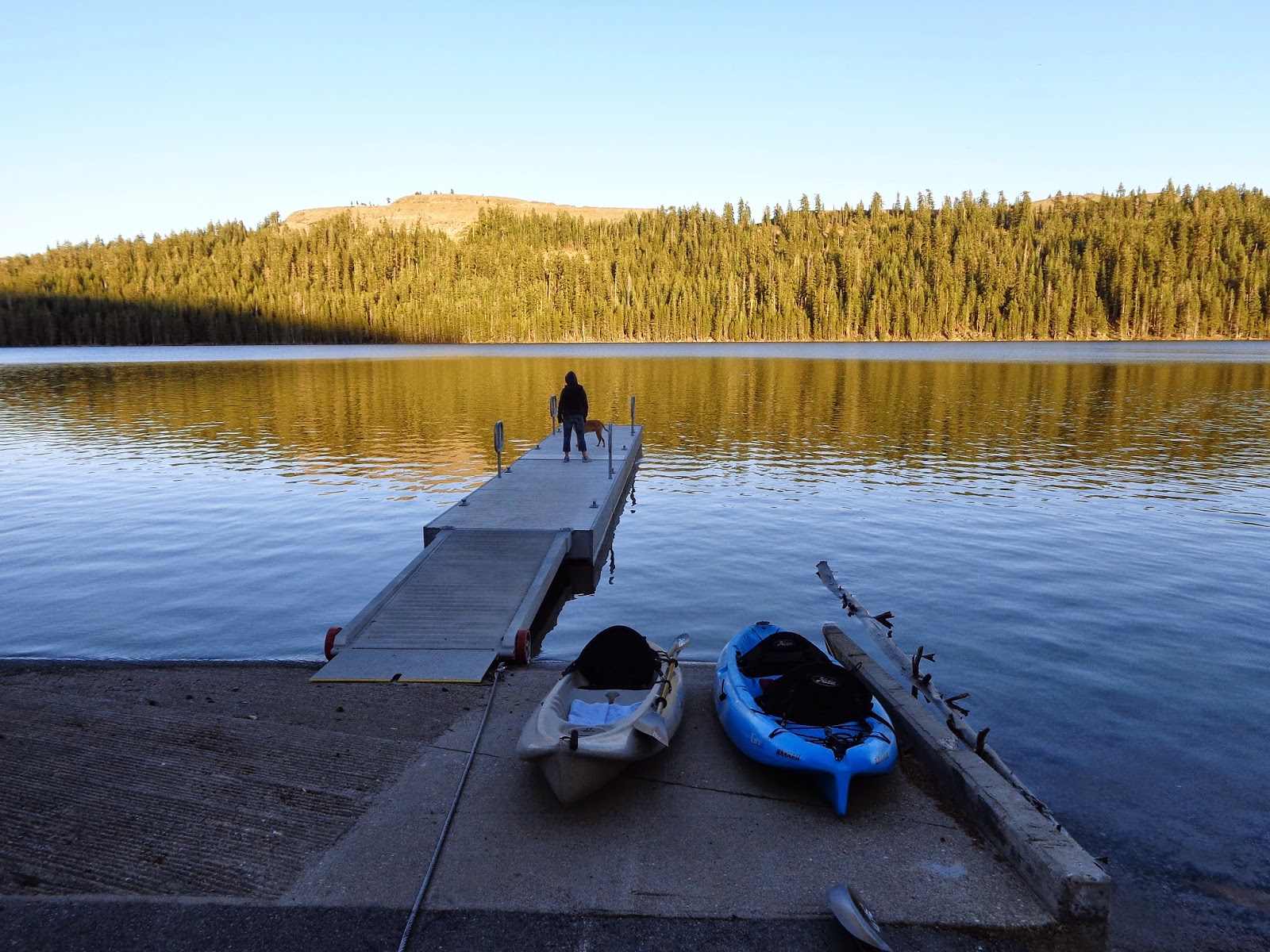 But the rest of THAT story will be found at my other blog THE UNLIKELY KAYAKER
Posted by Lesley at 5:56 PM

Ahh! So cool! Man I hope I get a chance to go camping this summer. It's just too darn hard with Cam's work schedule. But that evening kayak looks really cool!