My little girl celebrated her ninth birthday today. As is my tradition, I will dedicate a post to her. 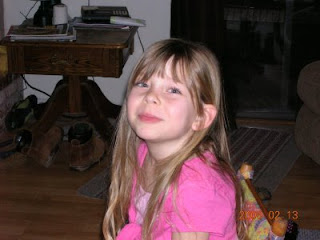 One of her nicknames is Miss Moo. "Moo" was her nursing word, and it kind of just stuck. Poor kid.

This is the child I had for my sister (not on purpose, genetics are just a funny thing). Shelby is so like her aunt that sometimes it's a bit scary.

First the hair. They both have this deceptively thick, stick straight, dark blond hair (well, my sister's hair was dark blond as a child anyway--I haven't seen her natural color since she was in junior high school.) 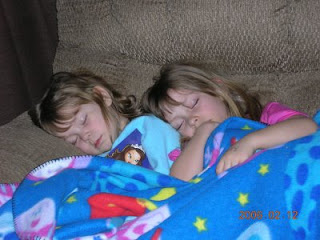 Then they both have ice blue eyes. Shelby didn't get the dark blue eyes from her daddy's side of the family, she got my sister's eyes.

Aunt Tracy can be a bit of a neat freak, and more than once I've caught Shelby in her room organizing stuff, and once she came to me and said, "I'm bored, can I clean the bathroom mirrors?" (Yeah, like I had to think about that one!), but what kind of kid thinks it's fun to clean stuff?

Both Auntie and Shelby have incredibly poor eyesight and had to get glasses at an early age (although Shel will only wear them at school when she has to), and after Shelby almost flunked 3rd grade due to her poor math grades, my sister confessed that she just never really got math either and really struggled with it. 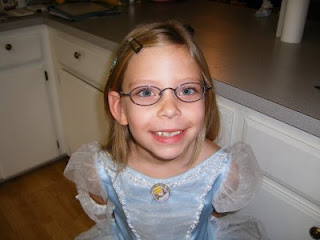 Besides being her auntie's mini-me, Shelby is a wonderful sister. She's a kind little girl that loves animals (just like aunt Tracy coincidentally). I think the most common adjective I've heard to describe her (especially from her teachers) is "sweet". 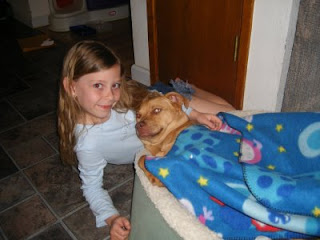 Shel can be a bit of a "blonde" at times, but she has no problem laughing at herself. She is tiny for her age, but dynamite comes in small packages, as they say.

She also would love to be a teenager NOW. She still likes to play little girl stuff, but if she had her way she would dress like a teen, have a cell phone, contact lenses and date boys. 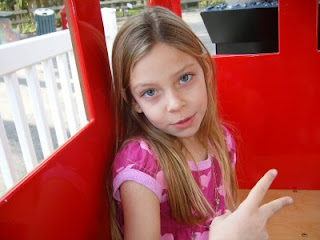 Shelby is an absolute baby lover. She's very competent when it comes to holding, changing and cuddling little ones (Ha! Aunt Tracy, one thing that differs between you two!) Shelby was a little over 2 1/2 when Nat came along and I remember how she would go stick her pinky knuckle into Nat's mouth to soothe her when she fussed, and she could change Nat's diapers by herself by the time she was 3. (Hey, Nat was #4, so I was pretty lax by then and didn't mind dirty fingers in the baby's mouth, or a toddler changing the diaper. I knew she'd live through it.) 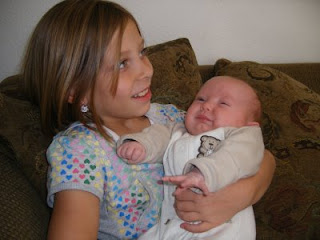 So yes, I'm blessed to be her mom, though I'm still convinced she's more genetically related to my sister. I'm excited to see her grow into a young woman and see where her life leads her.
Posted by Lesley at 10:06 PM

Wow, Moody! She's beautiful! And she's just Ewelina's age!! Evie's birthday is October 4th!! Crazy. I wish they could meet each other. ♫Happy Birthday to Moo!♪♫

Happy Birthday! Moo shares a birthday with my sister!

9 is a great age to be, though. She sure looks like a little sweetie :-)

Happy Birthday Moo! Love the pictures. She sounds like such a great girl.

Happy Birthday to my mini-me! :>) Moo and I are so much alike it's almost scary (except for that baby thing!). And then I get to share a birthday with Nat. I'm a very lucky aunt.

HAPPY BIRTHDAY! Hope you had a super 9th birthday :)

I love all those pictures, and the stories.

Her eyes are so expressive. ;-)