There's a Learning Curve to This

So this whole picture a day is harder than it sounds. The dang camera is in my purse, but I'm finding it hard to remember to get it out and use it. Like taking pictures of the project I did with the kids at preschool, and the soup they made for our feast on Wednesday, and my turkey dinner I got from the school cafeteria (it was actually good!) and when Carley got her ears pierced, or Cassie's family's amazing Filipino Thanksgiving spread, or better yet, Cassie's amazing homemade Lumpia...Yep, I gotta get my game on if I'm gonna make this work!

So here are my pics of the week. No there are not 7. And most were taken over the course of 3 days not 7. Like I said, I gotta work a little harder.

During my visit to my Dad's for Thanksgiving, my sister and I went through all my mom's Christmas stuff. That was no small undertaking to be sure! It was nice to get it done. We've been meaning to do it for 10 years now. Anyway, we divvied up the special ornaments and I took the rest to the thrift store.

These pictured below are some very special ones. The four at the bottom of this photo are my Dad's ornaments from when he was a child. They are German ornaments (his dad was an immigrant), and my dad says that when he was growing up, a big part of their Christmas was waking up to the decorated Christmas tree on Christmas morning. They didn't get much in the way of gifts, so this was really special. 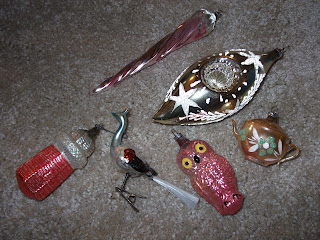 My Dad especially liked the Santa in the picture below. It was always on the tree when I was growing up. We always knew it was Dad's special Santa, and there was always some reminiscing on his part when it was brought out and hung on the tree. 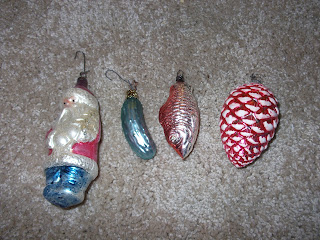 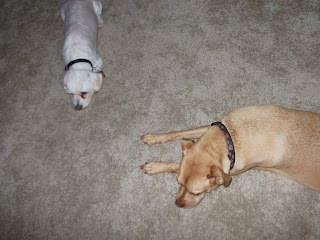 Here is my 2nd ever turkey I've ever cooked. It was a little overdone, but barely. I had help with the rest of the dinner and it was all a success. (Except maybe the gravy. I think we'll just go back to the canned stuff next year.) My mom always did 90% of Thanksgiving herself, and boy do I have new appreciation for her talent, energy, and cooking skills! She was amazing! 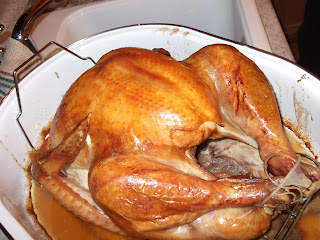 The traditional sitting down to dinner group photo was a success. The little girls are missing. They had Thanksgiving with their Dad's family and we sure missed them! However, my Uncle Steve showed up and we had the best time with him. It was so nice to reconnect with him and share laughs again. I'm SO thankful to have him in our lives again (and my Aunt Cathy too--who was out of town so she couldn't be there.) 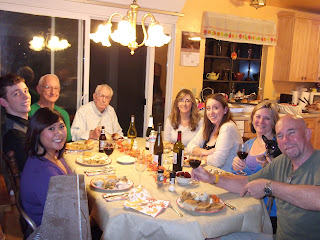 I got to spend some one-on-one time with Carley on Saturday. It was nice just hanging out and going to the mall. Dad gave us $20 to have lunch. One of our splurges was buying some Godiva truffles. Then we went to the sandwich shop. And ya know what? We spent exactly $19.99 of that twenty bucks! We couldn't believe it! Here is my French Vanilla truffle shortly before it was consumed. It looks like it has an L on it just for me! Oh my, I don't think there is anything better than Godiva truffles. 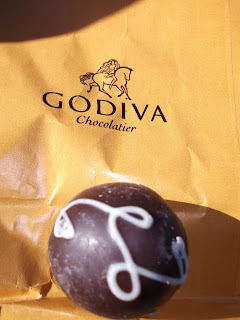 So that ends my so-called "picture a day" week. It may not have been a good week as far as me taking pictures, but it was a very good week of reconnecting, reminiscing, laughter and family togetherness.
Posted by Lesley at 11:02 PM