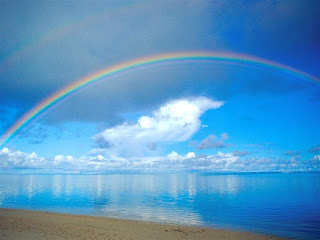 Today is the 6th anniversary of my mom's death. It's hard to believe it's been that long already and there's not a day that goes by that I don't think of her, or want to talk to her, or miss her. She was my biggest fan, my rock, my closest confident, my sounding board. I hope I can be even half the mother and grandmother that she was.

Like I said in my earlier post, the day of her death wasn't traumatic for me. The few weeks preceding it were. From her admission to the hospital, to her diagnosis of pancreatic cancer, to her being sent home after the realization that there was no hope for treatment was a mere 3 weeks. It was like a nightmare that wouldn't end, with each day bringing worse news than the day before. I am thankful in a way that it was a relatively short time, because I know that Mom would've hated to waste away for months knowing there was no hope, but on the other hand, because it happened so quickly it was too much to absorb emotionally, for all of us.

The night before she passed she was at home in her bed and was having trouble breathing. She asked to go to the hospital and my aunt called 9-1-1 to have her transported. I remember petting her head and trying to help her relax and breathe while waiting for the ambulance. I was really torn at the time as to if I should accompany her to the hospital or not. Because it was late and I was 7 months pregnant and already stressed beyond my limits, I chose to stay at the house and try to get some sleep. The next morning my uncle called and said that she was gone.

I didn't know what to feel. I did feel a sense of relief for my mom that she no longer had to endure the horrible disease that was consuming her, but I also felt guilt for not being at the hospital with her, and I felt confusion as to what we were supposed to do now without the woman who was the hub of our family.

The weather that day was mostly sunny, but there were storm clouds here and there, and later as the extended family gathered at my parents house, one of my uncles went outside to take out the trash. He came back in and urged us all to come out and see something. There in the sky above my parent's home was a full, beautiful rainbow. We all just stood looking at it for the longest time and I think it gave us all the same sense of peace. To me it was a message that mom was now ok, and was somewhere beautiful.
Some days later my sister and I were choosing a design for Mom's headstone, and none of the flowers seemed quite right. We finally realized what we were looking for was an iris. Mom always loved irises and always had some in our back yard, and we agreed this was just the right flower, and we were able to find just the right image. 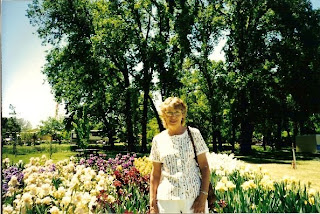 My mom in a field or irises

Due to my pregnant state, I was constantly obsessing over names and was always looking through name books. It literally took my breath away when later I came across the name Iris and saw the definition: Greek for "rainbow". From then on the rainbow became a symbol of my mom.

It was funny that in that first year how we would keep coming across rainbows.

My sister told me how one day she was sitting on the couch at my parents house and the light coming through the beveled glass on the front door was casting little rainbows all over her lap. She related that she felt a connection to mom watching the colors play across her legs.

One day I was unpacking boxes (as we had just moved into our house) and had come across a box that my mom had labeled when she had helped me pack some time ago. When I opened it and realized she was the last one to touch all these things I started to lose it. As I dug further into the box, I found a children's book and started crying even more as I remembered her reading this book to the kids. It was a story of a brother and sister who were fighting. Their fight is compared to the storm that is raging outside their house. As they make up, the storm goes away leaving a rainbow, and the mama says, "A rainbow is something beautiful that happens after a storm." To me this was the perfect illustration of what happened to Mom. Something beautiful happened to her after the storm of her illness. I keep that book in the top drawer of my dresser to remind me always.

There have been many other rainbow "coincidences" that have deepened my faith that something beautiful happens to us after our time on earth, and that our loved ones are somehow still a part of us even when we can no longer be with them.
Posted by Lesley at 1:39 PM

Your post was wonderful and also made me cry. I agree, the day before is harder than the day of. Dave and I went up to Auburn yesterday and put Iceberg roses, along with a beautiful Bird of Paradise, all from our garden, in the headstone vase. It's very peaceful there and you definitely get the sense that mom's spirit is watching over us.

I loved the connection of the rainbows with your Mom, something to keep her alive in your heart and mind. She will always be with you.

I feel that way about my Grandma. My little Baby Girl has my Grandma's look in her face and eyes - it's unsettling sometimes, how striking the resemblance is. But it's also such a wonderful comfort to me, to be able to remember her and the love we shared, and know that she'll always be with me.

I'm sorry I'm late responding, the day is past. I've been occupied with other things.

But I do hope it was a good day - remembering her, and I hope you have peace in your heart and mind always, when you think of her. :)