In the summer of '75, when I was 11, a new girl moved in a few houses down. My friends and I were curious about this new-comer, and finally we approached her and made friends.

Turns out she was from Wisconsin and was visiting her older sister for a month in California. Well, despite the fact that Kathy was 13 and closer in age to my sister (who was 14), we became fast friends. I remember hanging out in her sister's house. Her sister had an amazing collection of plants, plus one of those cool wicker chairs that hung from the ceiling (it was the '70s after all).

Kathy also introduced me to the wonders of yard sale-ing. I was amazed at what I could buy for a mere quarter.

We spent a lot of time together that summer. It sure felt longer than one month. After Kathy left and went back home to Wisconsin, we were dedicated pen pals. We kept in touch through high school, marriages, kids, you name it. Once in a while we would call, but mostly we wrote letters.

We saw each other once, for a day, when Kathy and her family were out visiting her sister again. Her sister had since moved to the bay area and I had moved from my home town, but we managed to both travel and get together and introduce our kids to one another. That was in 1996.

Kathy and I are not so much pen pals anymore. We email and call occasionally, but somehow we still manage to stay close. She let me know about a month ago that she would be out visiting her sister once again in November. I told her we HAD to make a point of getting together again.

I drove down to San Francisco on the 3rd of November and met Kathy at her sister's home. It was so strange, but not for reasons that you might think. The strange thing is that it wasn't strange at all. No awkwardness. I felt like I had just seen her yesterday and not over a decade ago. She said she felt the same way. It was really nice actually.

We had a great time despite the rainy and blustery weather. We ate Mexican food, did some sight seeing at Crissy Field, 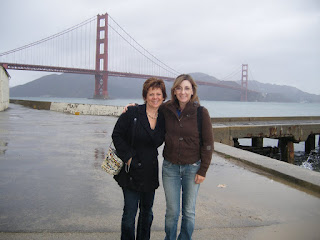 ducked into a coffee shop, 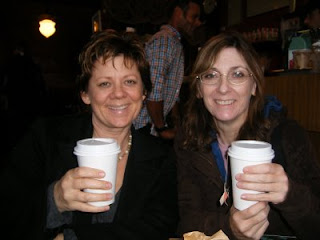 and peeked into some fun boutiques. Later her sister fixed home made pizza while we sat around and chatted. 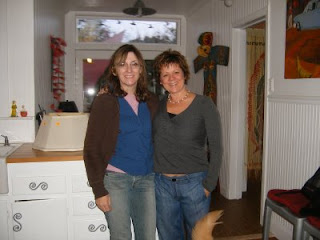 What a wonderful day, and what a blessing to have such a close bond to this friend who lives so many miles away.

Wow! That's some friendship! After only one summer!

My kids call and write to the boy and girl that they played with across the street for the last two weeks of summer before they went back to Spain. I wonder if their friendships will last as long as yours!!

Thanks for the nice blog entry about us. I wonder if you or I have any pictures from that summer? Probably not, but that would be great if we did. Thank you so much for coming to San Fran while I was in town. It was so much fun to see you. I don't like any of the pictures of me!! I look drunk or something!!!! I am looking forward to Carley's 21st Birthday. Hope it can happen. You are a great friend.