Sis made it to the junior prom on Saturday.

I did her hair. Twice. My niece did her make-up while I did her nails. We only had to do that once, thankfully! Then Sis took off to finish getting ready at her friend's house with some other girls. 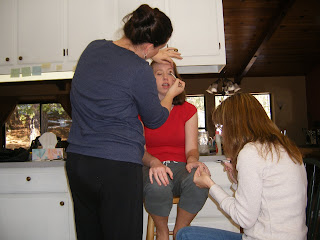 Despite going with her ex-boyfriend whom she wasn't speaking to just a week ago, she said she had a great time. (She said she apologized even though she felt she shouldn't have had to, but in the interest of fun at the prom they put their differences behind them.) 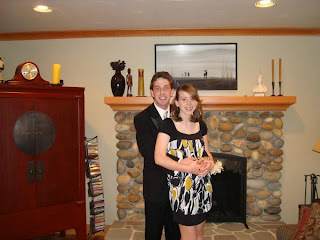 Sis has accused me of living vicariously through her with this whole prom experience, and she is probably right. I dropped out of school part way through my junior year. I got my diploma and went on to get a 2 year degree, but I never had the fun high school experiences that so many others did. I chalk it up to being painfully shy and to not fitting in to any of the campus cliques.

I know even if I had stuck it out in high school I wouldn't have attended a prom, I was always so socially retarded and afraid to dance. I still surprise myself when I think that now I belly dance!

And Sis is talking about throwing me a prom for my 50th birthday...so maybe it's never too late!
Posted by Lesley at 10:09 AM

She's darling. I'm so glad she had a great time.

She looks beautiful! :) What a fun memory she'll have of it.

My prom was awful. My entire high school experience was even worse! You couldn't pay me a million dollars to repeat it.

You're a good mom for helping her along and giving her the opportunities to make those good memories. ;)