Funny how your sibling relationships change as you get older. My oldest two have become very close in the last few years ever since my son moved out to go to college and he and Sis haven't had each other to argue with on a daily basis. Absence makes the heart grow fonder indeed.

Sis has been planning to spend a bit of her spring break visiting her brother with much anticipation and excitement. Of course part of the allure of visiting him is that he lives in San Francisco, but they were both truly looking forward to spending time together. She's no longer a pesty little sister, but more of a peer now that their 3 1/2 year age difference is not so pronounced.

Sis and her cousin traveled to the bay area on Friday and delivered Cam's Legos and Star Wars Monopoly game that he requested me to send along with them. I was glad to see that the hundreds of dollars spent on Legos in his early years was not wasted! 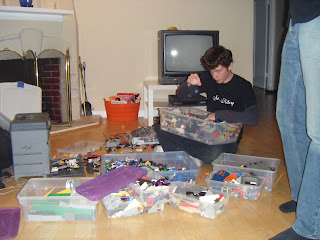 Sis and her cousin came back raving about the great time they had in The City. I was a bit worried about them traveling there by themselves. They are both mountain girls who've lived rather sheltered rural lives. I warned Cam to keep close tabs on them. I told him he couldn't just turn them loose alone in the city and expect them to survive, and that he must make sure they were supervised and kept safe at all times. Maybe I'm a bit dramatic, I don't know, but I have to do my mom-job of worrying. He assured me he would take care of them and I was glad to see them both back safe and sound with big smiles on their faces. 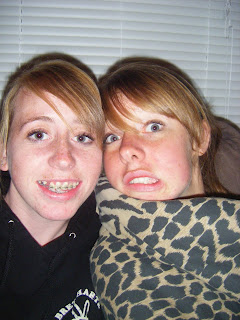 (The girls are 6 months apart in age and they look so much alike sometimes--silly faces or no.)

Now both Sis and her cousin are talking about looking into going to college in San Francisco. I sometimes wonder if growing up in the mountains in a small community makes city life all that more appealing. I know Cam loves it down there, and he adjusted to living in the city far easier than I imagined! 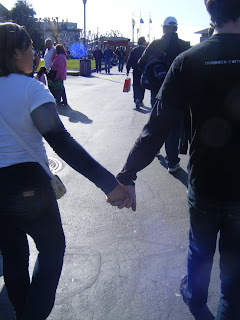 (A cute shot of Cam and his sweet girlfriend Cassie.)

At any rate, it was nice to see my kids having fun together and knowing that they're sibling bond is intact and that they are now at an age where they can love and enjoy each other. It really does pay off...eventually.
Posted by Lesley at 1:34 PM

I have a little tear in my eye with this sweet story. You've told it so well. Thanks for this lovely memorial of their trip.

By the way...I tell my daughter that she still needs to be "mommed", so she should just cowboy(girl)-up and let me "mom" her, which involves any or all of the following: worrying, asking her if she has clean underwear and telling her to drive carefully. I tell your daughter the same thing when she visits...that I represent her mother (you) when she's here, so she should just let me "mom" her and no one will get hurt. Heh.

I remember our trip to S.F. without mom and dad. You made me laugh the entire time (just like on our family vacation in Fort Bragg)! :>) Fun memories ...

Sweet story! It gives me hope for my two! And, can I just say that it's so nice to see someone call it, "The City" like you're supposed to?! I see people blog and they talk about visiting "San Fran" or "Frisco" and I want to scream.

Oh, and I liked your sister's comment as I've been to Fort Bragg several times, too. That Skunk Train was so much fun.

It's so reassuring to me that you posted this. I can't wait for the time when my girls get along!