My Baby is Six!

My number 4 child, Nat, turned 6 today. I don't even know where to begin with her. She's been quirky and unusual from the get-go. 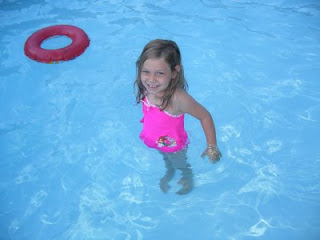 She was born just 2 months after my mom died and little Nat brought back so much joy into my life, and really got me through some rough times. What a little blessing she was during those really hard days.

Being the fourth child, she got to learn a lot of stuff on her own rather than have me hover over her and protect her. I think that's been good for her (or at least that's how I'm justifying my lax parenting style). She could put a band-aid on her own owie before she was 2 years old. Of course then she'd use the rest of the band-aids in the package as body art. She learned early that you don't want to put them on your face however-ouch!

It would get a little annoying because she'd have band-aids everywhere and then they would be dangling by a thread, but heaven forbid that anyone try to take one off. She would absolutely freak. I would try to get the danglers while she was sleeping but somehow she would feel the slightest tug and wake up channeling the Tasmanian Devil. 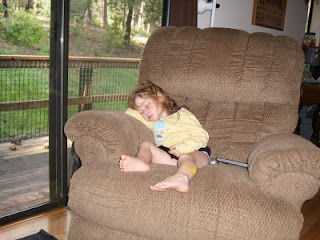 Awww...cute sleeping girl. Note band-aid on leg that will soon become a "dangler".

I remember at preschool graduation as she stepped up to the stage to get her diploma I saw something drop and realized she'd lost her "dangler" that had been haunting us for the better part of a week right there in front of everyone. I had to smile. It was such a Nat thing.

Nat is what we call a good eater. She will eat almost anything, and she's not afraid to try something new. She loves zucchini, beans, raw peppers, meat of any kind (although it's all called chicken), and she eats raw cilantro by the handfuls. She doesn't like hot dogs, baked potatoes or pizza (go figure) but anything else is fair game. 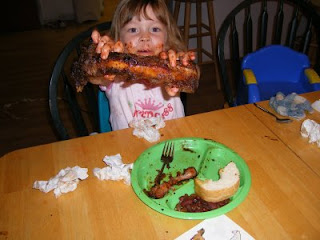 She's quite a lot like her father, and likes to collect and save random stuff. It seems like even the most odd or mundane item develops sentimental value to her and then she can't part with it. She has so many ordinary rocks, little notes and drawings, pictures cut from magazines and the like it's overwhelming. I try to weed out what I can when she not around just to keep it under control.

She went through a blanket jammie phase that lasted a good year and a half. She would only wear blanket jammies that entire time (and who was I to argue, again because she was #4, I knew there would be bigger fish to fry later). She had a few secondhand blanket jammies that she would cycle through, but then it got to the point where she would only wear her Clifford jammies. Pretty soon ol' Clifford was getting pretty small and threadbare and I searched the internet and the thrift stores, but couldn't find a replacement anywhere. Luckily about that time it was time to start preschool and even stubborn Nat knew that you don't wear jammies to school. We went school shopping and found some nice outfits, of course we couldn't buy any pants because she somehow got the idea that if she wore pants then someone might think she's a boy. (I'm not sure where that came from, again I blame her father's genetics). Well, then she narrowed down her outfits and began to wear only her "Disney skirt and Disney shirt" on a daily basis. For almost the entire first year of preschool. She had quite the reputation at preschool from the get-go.

About this time she not only wouldn't wear pants, but if she did try a new outfit and someone were to say she looked "cute" that would be the end of the experiment and she would refuse to wear the offending clothing that caused her undue attention from then on. We would have to tell people, "Don't say she's cute, just try to ignore her." Quirky, quirky!

Our Nat isn't all quirky and stubborness though. She has a fantastic sense of humor, she's super smart and she loves animals of all kinds. (She once had a "pet" ant she named Caramel, although it was actually whatever ant she happened to see at the time. "Look! There's Caramel!"). She also can't say her R's yet and they sound like W's, so she still has a very cute little girl voice. 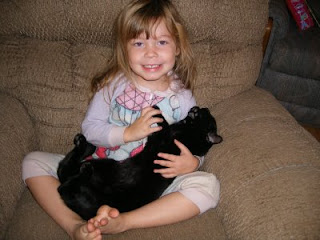 Nat with Gatsby and sporting the famous Clifford Jammies

We all love our little Nat. She is a joy and I look forward to seeing where her quirkiness leads her in the future.
Posted by Lesley at 8:35 PM

What a sweetie! 6 is a great age. I laughed when you said all meat is called 'chicken'...my kids have done that too! Happy Birthday, Nat!

I love the pictures, and your sweet description of her.

Happy Birthday to Nat. How about we arrange a marriage between her and my J in about 16 years?

Happy Birthday to my sweet niece and fellow Gemini (which might explain a lot of her quirkiness .... lol!). Nat is her own unique person and always has been, which will serve her well in the world. Every time Dave and I see someone with a bandaid now, we both chime in "dangler"! :>)