I Got a HOLLA

Last night I went to Sis' Friday Night Live Mentoring program to recieve an award. I had no idea what for or why. I was just told to show up by the coordinator. There were lots of other confused adults there as well.

It turns out they were giving out H.O.L.L.A. (Honoring Our Local Leaders and Administrators) awards. They kids each nominated several people they wanted to honor. Those who nominated (sometimes a group, sometimes and individual) would get up and talk about the person they were giving the award to and describe that person without giving the name away (well, usually!), then they would name the person, and said person would come up and recieve their award with much applause and hugging. Cool.


Sis got up and told the crowd she was honoring her best friend, her comic relief, the person that's always there for her, who clothes and feeds her and gives her rides when she needs them. And that this was a mother of four and an awesome bellydancer (most of what she said she wrote on the back of my award, that's why I remember it so well). Then I got to come up and accept my award with tears in my eyes. Awwwww. I was so honored to be recognized by my teen! 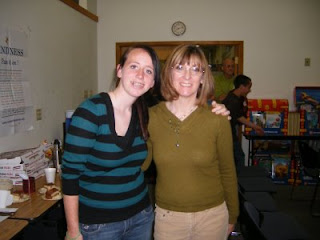 It was such a sweet and touching award ceremony. Many teachers and parents were honored and the things the kids said about those people were so sweet. They really seem to get the sacrifices that parents make and the extra effort teachers put in to make their lives better.
Posted by Lesley at 8:37 AM

That is AWESOME!!! Congratulations on your well deserved recognition.
(Oh and thanks for the plug yesterday.) I hope you continue to have a great day.
Happy St. Patty's
*hugs*

That is so neat! What a tear jerker. Such a great idea to have kids give awards like that. I just think this is the best idea.

Awesome and well-deserved. Darling picture of mom and daughter too.

You are a lucky mom. Congrats!

Aww, see they are paying attention! Isn't it nice to know that sometimes? Congrats!

Oh man, I'm crying!! Mostly because my Mom's in the hospital, but that was a really sweet story. :-)

Yay for Sis! For recognizing what a great Mom you are, and obviously for being such a great person herself.