This is how Thursday started: 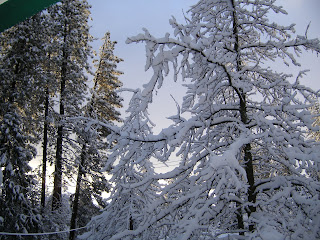 But how it ended was anything but pretty. We got so much snow again on Thursday morning that the school called a 2-hour late start. We, however, didn't make it at all because I couldn't get out of the driveway in my little Honda Civic. My husband is out of town until Monday doing a rib cook-off somewhere near the Mexico border, so I'm on my own without a 4 wheel drive vehicle or a manly man to shovel and do other manly winter chores.

My mood changed a bit when the power went off around noon. But then it came on an hour and a half later. Yay! Then it went out, then it came back on-yay again! Then it went out....and no yay...just lots of calling the outage hot line and hearing that power would be restored at 7pm. Then more waiting and watching as 7pm came and went. Boo.

I really don't like power outages, give me my modern conveniences anytime, but this time in particular was especially difficult. Not only was it just me and my 3 girls, but we don't have heat in this house if we don't have power. Unlike most the places we've lived, this house has a kerosene heater instead of a wood burning stove. Let's just say things got a bit nippy!

The four of us bundled up in blankets and ate PBJ sandwiches, then about 8pm we decided that we would all pile into my bed with all the blankets and cats in the house on top of us and watch a movie on a (thankfully fully-charged) laptop then go to sleep with the hope that in the morning we would wake up to the sound of the heater blowing. No. Such. Luck.

I was up at 5am calling the power company only to hear that they had no estimated time to restore the power. Then the school called and said there would be no school because of the power outage. Then my daycare families called and I had to tell them I couldn't watch any kids today due to the frigid temperature in my home. At 7am I was completely depressed, frustrated and hopeless. Luckily, I have a fabulous niece who lives nearby who had a fully functioning home with a working heater who came down and rescued us from our miserable living conditions. We spent the day with her and my little grand-niece and it was wonderful.

Our power was restored this afternoon. The heater has been blowing full blast for about 6 hours and the thermostat just now hit 68 degrees. We are happy and tired and looking forward to a good night's sleep. And right now it's raining and not snowing anymore. Yay!

So Thursday ended badly, and Friday didn't start out well, but now things are much better. A little heat and light will do wonders!
Posted by Lesley at 8:23 PM

During the winter, my biggest fear is a power outage. Fortunately we haven't had one this winter and actually don't get them very often at all. But, we don't have a fireplace and if we did have an outage we'd get pretty cold. It hasn't hit above 21 degrees all week.

I'm glad you're back to being warm!!