A Tooth Necklace and A French Fry Hole

The Gross Out Trifecta is now officially over, thankfully. The dog has been de-ticked, the daycare boy lost his tooth last week, and Nat finally lost her snaggle tooth yesterday. Huzzah!

Nat made sure to keep her tooth as long as possible. On Sunday it was hanging by a thread and giving her a lisping speech impediment. I was happy to send her back to school on Monday to give myself a break from having to look at the nasty thing.

When she got off the bus after school she made a bee line into the house, and there around her neck, was (drum roll please...) The Coveted Tooth Necklace. 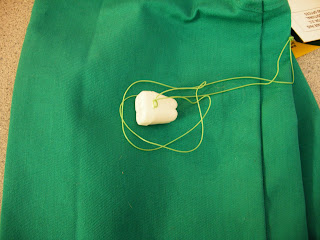 Yes indeed, her very first tooth fell out during library time apparently, and she got to take it to the office and receive the plastic tooth-holding tooth-shaped necklace that is the envy of one and all. She wore it proudly the rest of the day.

I remember when Shelby had a loose tooth in first grade, she said, "I hope my tooth falls out at school." I asked why and her response was "So I can get a tooth necklace!" Ever since then I've been hip to the prestige of this small white treasure.

Nat, being the OCD child she is, had to wash and dry her tooth and enclose it in a ziplock baggie before it was allowed to go under her pillow for the Tooth Fairy. I swear, the Tooth Fairy was quite surprised how much noise a little plastic baggie can make when trying to surreptitiously remove it from under a pillow. Luckily the Sand Man had done his job well (might as well include as many mythical people as possible), and the Fairy made off with the disgusting incisor leaving a crisp dollar bill in its place. Oh the joy!

Oh, and the other cool thing about losing a tooth (this was a top front one) is that it makes a hole that's just the right size to put a French fry through without having to open one's mouth. Daddy made french fries last night for dinner for just this occasion. (We have strange traditions in our family, what can I say).

So not only does Nat have a coveted tooth necklace as a keepsake, she also has a fantastic French fry hole to enjoy until the permanent tooth comes along and ruins it.
Posted by Lesley at 1:56 PM