I have several boxes in the garage with school keepsakes in them. For Cam, my first born, there is a full box of EVERYTHING he brought home from school, including worksheets and lunch menus, for at least the first 4 years of his school career. For the second born, Sis, there are a couple boxes of stuff. At that point I wasn't compelled to save every scrap of paper with her name on it, and settled for saving almost everything, so there will be a couple grades worth of stuff in one box. Now with the little ones, I'm afraid that I haven't saved enough, especially with Nat. I get so overwhelmed with the clutter already in my house, and the amount of stuff she produces, that unless it looks really special, I sneak it into the garbage when she's not looking. Bad, bad mom.

I recently was inspired to go through Cam's kindergarten box and actually put the treasures in a scrapbook, and trash the rest. After all we couldn't really enjoy it when it was stored in a box in the garage. It was fun to look through it all, and in the long run, even after weeding it out, I still put tons of stuff in his scrapbook. I know at some point his sisters will notice, "How come Cam has an entire album for his kindergarten stuff and I only have 2 pages worth?" I guess I'll have to convince them to be happy that they have anything at all!

Here are some of the highlights from Cam's kindergarten year. I especially liked his stories:

Here's a self portrait done on the first day of kindergarten, and some little paper guys he drew and cut out which I couldn't possibly part with: 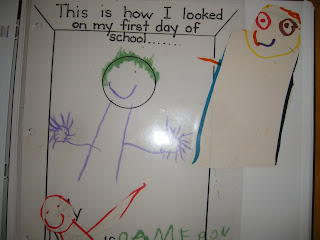 a drawing of "a tree in a lightning storm" (left) and a story of Robbie Rabbit, "Robbie Rabbit went to the forest and he met a hunter. He carried the hunter home and he fired him on the stove." 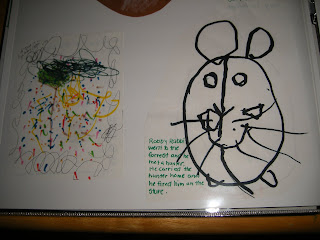 His Christmas wish involved a vehicle, of course, and below that a drawing of our house at the time, which had a tin roof, so I thought his story about the rain was pretty neat, "The rain sounds like fingers tapping on a table. It goes fast. I pick apples in one day. These are my two apple trees." 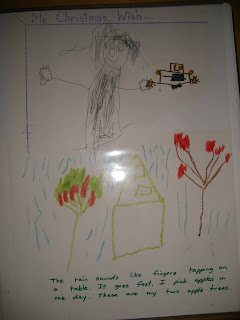 The inside of my Mother's Day card complete with a drawing of me. Awwww... 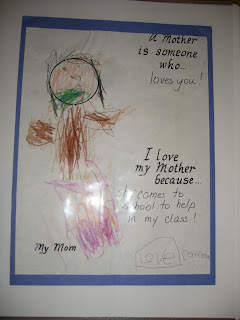 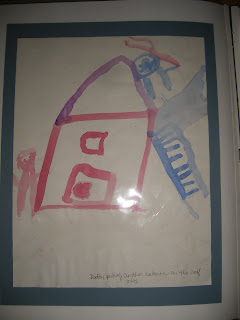 I didn't take a photo of this, but there is a drawing of some space guys and planets and it is captioned "If I were an astronaut I would visit the planet Mercury because it is close to the sun and I am cold here. I would tear up my house and build it on Mercury with air conditioning." Now that's a clever kid!
Posted by Lesley at 8:48 AM

Kindergarten pictures are the best. That is a real treaure of a scrapbook you have got going.

Best Wishes for the kids dad at the hospital! The babe looks healthy and sweet.

Congrats on the new job, too.

I laughed so hard when I saw that first photo of what he looked like on the first day of school...not quite a banana, but close. He was creative even back then.