The Fair and Fish Abuse

We spent most of the day on Sunday at the fair. After one of the rides collapsed and injured 23 people on Friday, the rides had just reopened Sunday afternoon. I had to weigh my options: I had pre-purchased ride tickets plus every ride had been gone through with a fine toothed comb by OSHA vs my own prejudices against the crazy looking carnies and the accident that sent 2 dozen people to the hospital. I probably qualify for the bad mom of the year award, but I let my kids ride the rides. And they were thrilled. And no one ended up in the hospital. And I still feel guilty. Go figure. 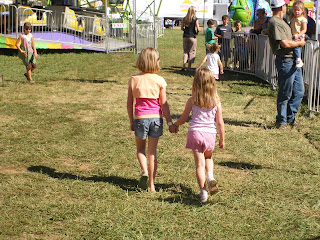 One of my daycare kids found us and presented us with a ziplock baggie with a little fish in it. He didn't have a tank at home, so he wanted us to take it. Nat was thrilled. Poor little fish wasn't looking so well, and with the outside temperature somewhere around 100 degrees, I put him in the cooler. The girls wanted to name him immediately but I told them they had to wait, and if he made it home alive they could call him Lucky.

On the way home, Nat wanted to hold the fish, and she then decided that his middle name would be Charms. He made it into the tank with our other goldfish and had a hearty meal. The girls were thrilled.

Well yesterday afternoon Lucky didn't look too good, and within half an hour he had died. Poor Nat, she was a lot more upset than I thought she'd be. She cried for a long time. She wanted to bury him in the backyard, so I found a small box, and she and Shelby gave him a proper burial.

It really bothers me to see any animal suffer so I think it's terrible that fairs still give children a small fish for a prize. If they survive the day being sloshed around in a bag it's a miracle, and then if they do make it into a tank they've been so mistreated they aren't likely to survive anyway. I think it's a lose-lose for the fish and the kids. Give them a cheap stuffed animal or a rubber frog for goodness sakes! It makes me crazy.

I think Lucky was lucky indeed though, because he was truly loved by a little girl.
Posted by Lesley at 12:20 PM

Poor Lucky. Poor Nat. At least Lucky got to swim in a tank and eat before his untimely passing. I'm with you .... live beings should not be given as prizes to kids at fairs. It's really so "un-fair" (seriously).

They gave out fish at a primary carnival activity and every single one died because they put tap water in the bags. Talk about disappointed children!