Well, great-nephew really, but I call him just my nephew.

I'm really blessed to have a wonderful niece by marriage that I'm very close to. I was her labor coach/doula with her first baby 3 years ago, and this time that was the plan as well, but due to a very difficult pregnancy involving a subchorionic hematoma that caused bleeding for the first 20 weeks, and then preterm labor and bed rest for the next 11, the birth plans kind of flew out the window and our great nephew arrived some 8 weeks early on Cinco de Mayo via c-section and weighed in at a pretty hefty 4lb 5oz.

The NICU rules are that they only admit parents or grandparents, but my niece really wanted me to be able to see him, so I had to masquerade as a GRANDMOTHER. I was not that thrilled. Surely at 43, I could be old enough to be a granny, heck I have friends who became grandmas before they were even 40, but the thought that I may be looked at as a grandmother was not an appealing situation to me.

My niece's roommate had her grandmother turned away (the baby's great-grandma), so I was a bit worried about trying to deceive the perceptive nurses. My niece and I discussed the deception we would perpetrate ahead of time so that we'd have our story straight. I would be her husband's step-mom after his father had had one of those mid-life crises and went on to marry me, a MUCH younger woman. Yes, that's the ticket. We had it all planned.

I nervously followed her to the NICU where a nurse opened the door and I followed my niece in. We signed in, washed up and went to the baby's bed, and NOT ONE PERSON questioned my grandmotherliness! They didn't even need my niece to say, "Oh she's the grandmother." I was a bit miffed to say the least. What a blow to my ego!

Being tagged as a grandma had it's perks today though, because I got to see my new little nephew and he gripped my finger with his tiny hand. He's absolutely beautiful and doing well. Yeah, I could get used to this granny-thing if it means spending time with him! 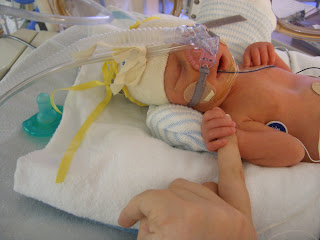 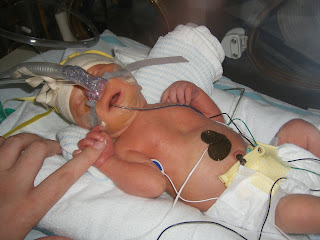 Welcome to this little one! Please pass on our congratulations to his parents and big sister.

I don't envy those days of having a baby in the NICU. But it looks like he's got a pretty good chance! I sure hope he'll do well and thrive.

And I'm not sure whether to congratulate you on your deception, or give condolences because no one questioned your age. :S

So, uh, congratulations on being a great-aunt! ;)

I remember the NICU. Those aren't easy days. Having the support of family and friends helps so much. What a little fighter!

Grandma Moody... that has a nice ring to it!

When I moved to Idaho and met people who were my age and were grandmothers, I freaked.

What an adorable baby.