We had an eventful and fun weekend. It started by seeing Bang Bang You're Dead a drama production that Sis was in. It was about a school shooting. Sis played one of the victims who comes back to haunt the shooter and ask, "Why me?" It was incredibly powerful and well done. I don't think I ever want to see my daughter on stage listing the things she'll never accomplish because she died too young ever again though. It made my throat want to close up. It was weird, but good, in a weird way... 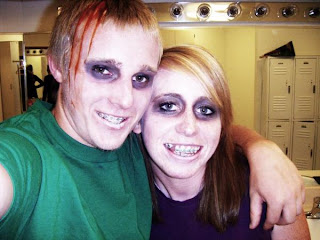 Sis and her boyfriend after their performance in BANG BANG YOU'RE DEAD Creepy, no?

Saturday I attended a hafla (that's what we bellydance folks call a party) where we were challenged to perform to a non-bellydance song. I returned to my country roots and chose John Anderson's Straight Tequila Night to dance to. What a great time. 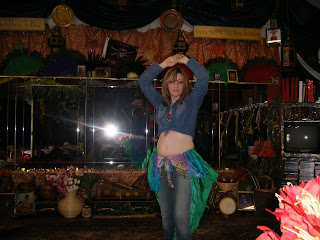 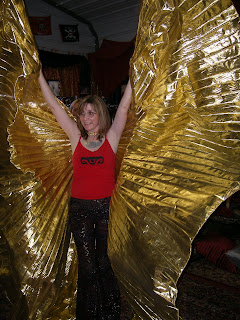 Playing with a pair of Isis Wings

Moo convinced me to lop off her hair. This child has always had the most gorgeous head of hair. I kept it super long for quite a while, well until it got tangled up the wheels of a scooter board when she was in kindergarten and the teacher had to cut a chunk out to free her. We cut it to her shoulders around Christmas, but she's been bugging since then to have it up to her chin. So I did it. The kid has enough hair for 3 people, so it took a couple days to get it just right. A bob this short is not very forgiving. Of course it looks really cute on her. She's an adorable kid, and she loves it which is the main thing. 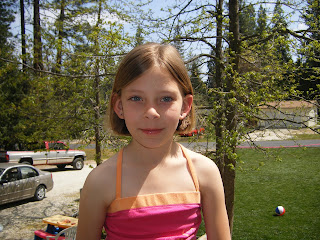 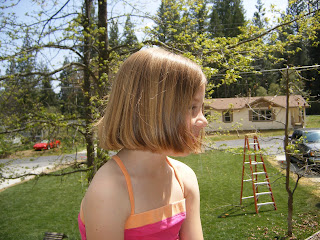 Sis had a bunch of friends over on Saturday for a BBQ and party and sleep over. I made my famous Dirty Snow Cake, which is white cake with crushed up Oreos in it, filled with cream with more crushed Oreos, and then frosted with whipped cream. It's sooooo good!

Yesterday I told Sis I wanted to take her to the movies for her birthday. She's been so busy with play rehearsals and friends and I've been busy with kids and dance, that we really haven't spent much time together. We saw Made of Honor. It was really enjoyable. Of course it was predictable, but who cares since it was full of Patrick Dempsey goodness, and the guy who played Colin was no slouch either.

We then went to Applebee's and had salads. I had the Chinese chicken and Sis had the shrimp. I had their strawberry limeade which was so darned good. We finished by sharing a Triple Chocolate Meltdown dessert--a chocolate lava cake with a scoop of vanilla ice cream. Soooooo incredibly yummy! 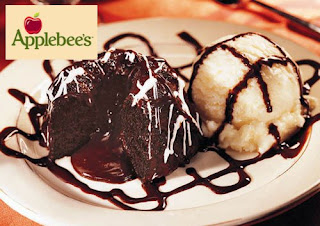 Triple Chocolate Meltdown in all it's glory

BUT to top it all off, this is what Sis posted on her myspace:
my mom treated me to a girl's day out today.


we went to the movies
and then shopping
and then applebees.


it's always nice to have a day out with just me and my mom, it's rare that i ever get her all to myself.


and when i do i soak up every minute of it and we usually end up laughing our faces off and i wouldn't want it any other way.


she wrote about me on her blog for my birthday and i just read it and it made me cry.


but it's the good kind of crying.


she is my role model, my best friend, my comic relief, and above all my mother.


i love her and appreciate her more than anything.


Wow, just wow, what else is a mom to say? You can all say "awwwww" now. Thankyouverymuch.
Posted by Lesley at 12:06 PM

Fun weekend! And, what a beautiful tribute from Sis! My mom would call those payback days. She sounds like such a great girl and I think you're blessed to have each other.

And what a cute little bob haircut. ;) Our 4yo wanted her hair cut like Baby Boy's when we did his a few weeks ago (buzz). I told her, uh, no. But we chopped it a little shorter to make her happy.

Love all the pictures! ;)

I am so happy for you! Sounds like an awesome weekend.

You sure did have an eventful and fun weekend. :>) Moo is looking more and more like me everyday .... I think you stole her from me (lol!). Carley is such a wonderful daughter (and niece). I'm glad you two had some one-on-one time together.