My eldest daughter is 17 today as of 6:47 this morning. She was 12, I repeat, TWELVE long days overdue, but when she finally decided to arrive, she did so in a record 1 hour and 15 minutes with her dad making a call to 9-1-1.

The local volunteer fire department arrived to deliver her, and then we were transported to the birth center by ambulance. Sis was 8 lb 14 oz chubby baby who was a little bruised and swollen from being delivered so swiftly. I enjoyed her birth because I felt I was in control, much to the annoyance of the 9-1-1 dispatcher and the paramedics who tried to persuade me to lie flat on my back. They told me, "We have to see if the baby is crowning." And I told them I would let them know exactly when that happened as I would be the first to know! A cooperative patient I'm not.

Sis was an extremely high energy baby who didn't really like to take the time to sit still to nurse, so she was on the scrawny side. She began walking at 9 months, and began running at 9 months and 1 day. I'm pretty sure she gave me my first gray hair.

She is the most opposite in personality to me than any of my other children. She's extremely outgoing, rambunctious, confident, emotional, expressive, adventurous and a born leader. The only trait we share is stubbornness.

All my children have had my cursed horrible teeth and Sis I think had the most traumatic dental experience as a small child and because of that going to the dentist is very stressful for her. We had found a dentist she was comfortable with and had an agreement with the office that she would see the young dentist at her appointments and not his father as she had had a bad experience when the father had done work on her (she told him he was hurting her, but he didn't believe her and in the end left her with bruising visible on the outside of her cheek!)

Well at one appointment when she was 13, she went in and not 5 minutes later she was back out. I asked what happened and she told me that the older dentist sat down on the stool next to her and she asked him if he was going to work on her. When he said yes she told him, "No you're not. You hurt me last time!" She then proceeded to remove the bib and walk out. I was really impressed that she stuck up for herself in that situation. I know I would've never been that brave at that age. It was nice to know that she has it in her not to just go along with something and that she's not afraid to speak up.

Sis has always loved the water. She taught herself to swim and is usually the first one in and the very last to get out whenever swimming is involved. When we lived a bit further up the mountain, we had a small stream-fed lake near us. On the very first warm day of the season she would pester to go swimming. She would be the only one in what amounted to melted snow water, sometimes with snow drifts still in the shady spots around the lake. The rest of us would watch from the beach and marvel at her determination.

Sis has been an excellent helper with her younger sisters. She was 8 1/2 when Shelby came along and 11 with Nat. She has a natural ability with infants, and I trusted her early on to comfort them. She always wanted me to have twins, and was always disappointed to only get one baby at a time. I told her that I don't have the energy for twins, but I know that she does and it won't surprise me at all if she gets blessed with twins when she has children!

Well, I guess I could go on and on, but suffice it to say that I'm the luckiest mom around to have Sis as my daughter. She's taught me a lot about taking chances and having fun. I know that she has a wonderful future ahead of her and that anything she sets her mind to achieving will become a reality. 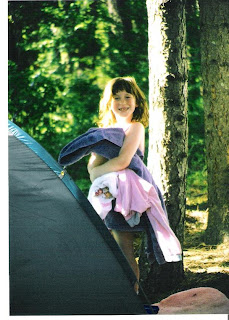 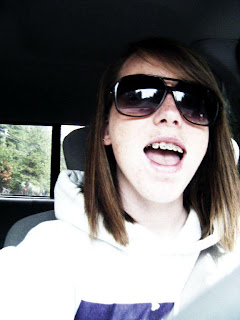 To Sis: Happy 17th Birthday to a beautiful, fun and always entertaining niece!

Happy Birthday Sis! She sounds remarkable, but I think she's the lucky one to have you as her mom too!!

Happy happy birthday! to a fun teenager and best wishes to mom too!

P.S. My daughter and I have way different personalities which makes me admire her all the more.

Happy (belated) Birthday to her!!

Such a lovely post, about an obviously intelligent, smart, savvy, beautiful young woman! She sounds positively charming and delightful, and I'm sure you're such a proud, happy Momma. ;)

I'm also sure you deserve a lot of credit for allowing her to develop her strengths and go with her instincts - it's tough to teach a child that sometimes! (Well, maybe it's just tough for me.... cuz I'm such a CONTROL FREAK.)

Anyway. Hope it was a great day. :) And I hope the next year will be full of good experiences and memories for her!

Happy Bday...a little late. Give her a big smooch from aunty K. I love that kid.

(She and my oldest are a lot alike...must be that they were born on the same day only in different years...and he was 3 weeks overdue.)