Last night Sis and I headed to the hospital where her dad is recovering from surgery for throat cancer. It is such a helpless feeling to see someone fight cancer. I was glad that Sis and I could bring him some books and movies to keep him busy as he makes his recovery. I think Sis is taking this a lot harder than she puts on. My older kids lost both their grandmas to cancer and have seen their grandpa fight it and lose his bladder because of it. Sis has seen the effects of cancer from a young age, and is scared for her dad. It is such a horrible disease.

I really wish my kid's dad (I prefer to call him that rather than my "ex") wasn't having to deal with it at all. He was in good spirits despite not being able to talk (due to a tracheotomy) and was writing comments and questions to us like crazy. I had to tease him a bit about his deplorable penmanship, and his sense of humor was definitely still intact!

I told him the story of my dad's surgery in August (which we laugh about now, but was very trying at the time). Dad woke up in ICU "confused and combative", and because of that they had to put restraints on him. Well then he thought he had been kidnapped and was being held hostage, so that when my sister came to visit he was cursing out the nurses and yelling to my sister to call 911, and get his nephew to bring guns. At one point 3 nurses had to hold him down. As dad recovered we told him a bit of what he went through as he didn't remember anything. He'll say that he feels terrible that he'd cursed out the nurses, but he really likes hearing the part about how 3 nurses (one of them a male) had to hold him down and how they commented on how strong he was! He's pretty proud that at 78 he could give them a "run for their money"!

I know seeing Sis really cheered her dad up, and he's recovering faster than they predicted, so we're just praying that things keep getting better for him.

My little preemie nephew is at the same hospital, so we got a chance to visit him as well. He's now in the NICU "Step Down" nursery where they're not nearly so strict about visitors, so Sis was able to see him for the first time. He's doing so well that he may be able to come home on Sunday. Here's a photo of him saying "Hi" 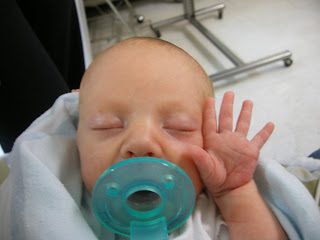 Can you tell I'm crazy about him? In fact I may be known forever more as the "crazy auntie" 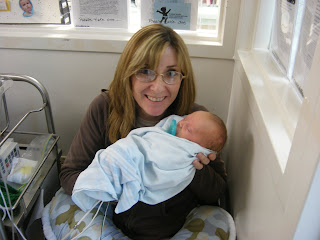 Labels: Health and or Lack of It, Krazy Kinfolk, Those Crazy Kids

Please let Andy know lots of healing thoughts are coming his way from all of us. Please give Sis a hug for us.

thank you so much for this. It made me laugh about your dad (sorry 'bout that, but it was funny.) I took the younger two to see Indiana Jones this morning to help get my mind off some of this stuff. It helped to come home and read this about Andy.

What an adorable little baby. Congrats.

Wow. What a set of circumstances!

Hope everyone improves quickly, and order is restored to the universe.

Reading that brought to mind the stories my parents told me about my birth. While my mom was in labor, my dad's dad was in the same hospital dying of lung cancer. So my poor dad was going back and forth from the birth of his daughter to the death of his father - what an emotional time that must have been for him!!

After I was born, my dad went in and told my grandpa about me. He smiled, and 3 short hours later he was gone.

Life has it's ironies, doesn't it.

I sure hope Sis' dad recovers well, and that your nephew gets to come home soon.