Last night was the first time I attended our county's Miss Podunk County pageant. I've lived here almost 20 years, and never been to the pageant that kicks off our county's fair festivities. Sis on the other hand, has attended almost every year since she was probably middle school age with her friends. She and I went together last night, and it was a lot of fun.

Two girls from my bellydance troupe were competing, so I made going to the pageant a priority this year and I'm glad I did.

First the theme was "Kill Bill" based on some weird movie I've never seen. The girls did a martial arts inspired opening dance, and let's just say it was interesting. What a strange theme for a pageant, but what do I know.

Next came the Health and Fitness category, again I didn't really get it. They came out one at a time in karate type outfits, took off their white jacket top to reveal a colorful tank top and sashayed around the stage posing. I like how they had to walk with their head turned over their shoulder as they exited the stage so they never at any time, lost eye contact with the audience. Now that takes coordination!

Then came the talent portion, and it was very entertaining. Some girls were truly blessed with talent. Others tried REALLY hard, and for that I say, "Good effort!" My two friends were the ones that had talent, and I swear I'm not even being biased. The winner of my own "You don't see that every day award" was the gal that did rifle drilling. It was a bit repetitive but I've got to hand it to her for flinging that heavy thing around.

Now during this, Sis is telling me she might like to enter the pageant next year. She was trying to come up with a talent. So we were brainstorming: Singing, not so much; dramatic monologue, maybe; musical instrument, no; dance, probably not... Then it came to me. Talking. She does it all the time, all day long. Ever since she was tiny, if she was awake, she was talking. I told her she could get up and just tell her random funny stories and people would think she was hilarious. I thought I was on to something, but she shot me down. I guess it's back to the drawing board...

Finally, the best part: evening gowns. We had our opinions of each one. Some were flattering and glamorous, some were too over the top, one we labeled "too middle school dance" and one was made out of duct tape. I kid you not. This girl designed and made her dress out of orange duct tape and it was fabulous. Sis is friends with her, and she had also made her junior prom dress out of duct tape along with her date's tuxedo. Amazing, no? 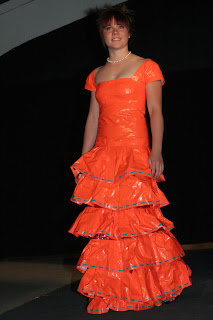 The cheesiest part was after they sauntered in their gown, the girls got to thank their sponsors, etc, etc, then had to say, "I believe..." with their own sentiment. They were all VERY cheesy, there was just no avoiding it, but the one that sticks out to me is, "I believe every life is a fairytale written by God."

Well, after all was said and done, a girl from the rival high school won the crown, but one of my girls won first runner up. I thoroughly enjoyed my first ever pageant and all it's cheesy over-the-top goodness. I'll definitely be back next year.
Posted by Lesley at 1:56 PM

Love the orange duct tape dress. Her date must have really loved her to agree to wear that tux.

This sounds like watching a live version of America's Next Top Model .... too fun!